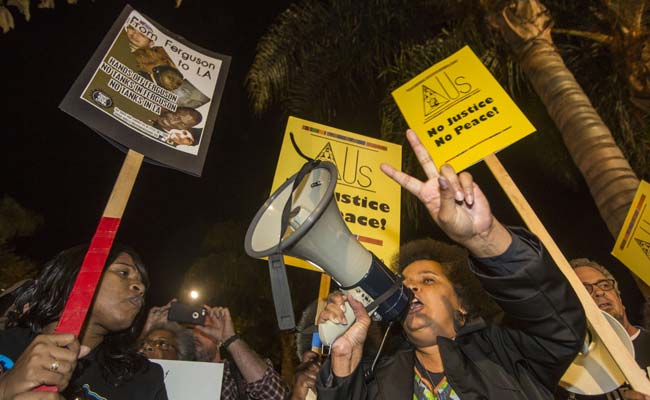 St. Peters: Racially-charged protests in Ferguson are fueling an exponential increase in gun sales among mainly white customers at one of the premier shooting ranges in the country a 20-minute drive away.

The Ultimate Defense Firing Range and Training Center in St Peters, outside St Louis, Missouri typically sells three to five guns a day, but in recent weeks the number has risen to 20 or 30.

"We've seen a tremendous run on hand guns, specifically, because people have an element of fear with what's going on in Ferguson," said owner and active duty police officer Paul Bastean.

"Some of them that live in that area definitively are here because they are afraid. Especially two nights ago when there were gunshots all over," he said.

Ultimate Defense sold 33 guns and shooters fired 18,000 rounds on the practice range on Tuesday, the day after protests 20 miles (32 kilometers) away degenerated into arson, looting and live gunfire.

Rage has simmered in the mainly black suburb of Ferguson after a white police officer shot dead an unarmed black teenager in August.

After a second night of protests saw a police car torched and shops attacked in Ferguson, Bastean said he sold 21 firearms in the first three hours of business.

In Ferguson protesters demand an end to what they call racial profiling at the hands of the largely white police force.

Ultimate Defense is one of four gun ranges in Missouri and around 50 nationwide that holds a five-star rating from the National Shooting Sports Foundation.

Few clients wanted to talk to reporters, but a retired police officer who gave his name as Jeff stood firmly behind the grand jury process and Wilson himself.

"I think it was completely open and fair, and open minded," he said.

"I don't care what color you are, if you attack a police officer you're going to suffer some consequences.

Almost all customers AFP saw at Ultimate Defense were white. Bastean says seven percent are black, a statistic he says reflects the ethnic breakdown in the area.

A July study from the Pew Research Center said blacks are significantly more likely than whites to be gun homicide victims.

But of the 34 percent of Americans who have a gun, rifle or pistol at home, 41 percent are whites and 19 percent black, Pew said.

Ultimate Defense sells firearms that range from $320 to more than $3,000, and opens its range to children as young as 13 years old accompanied by an adult.

In four years, Bastean says he has trained 20,000 people, five of whom went on to use a weapon in lawful self-defense. Three would not be alive today without the training and weapon, he said.

While the majority of protesters on the ground have been peaceful, Bastean believes the minority that have engaged in looting and arson is a threat.

Asked about increased gun sales after the events in Ferguson, regular customer Jeff said people were right protect themselves.

"We've heard a lot of threats and people have come to realize that you have to be able to protect yourself. Police officers very seldom are really successful in preventing a serious situation," he said.
Comments
FergusonMichael BrownDarren WilsonGun