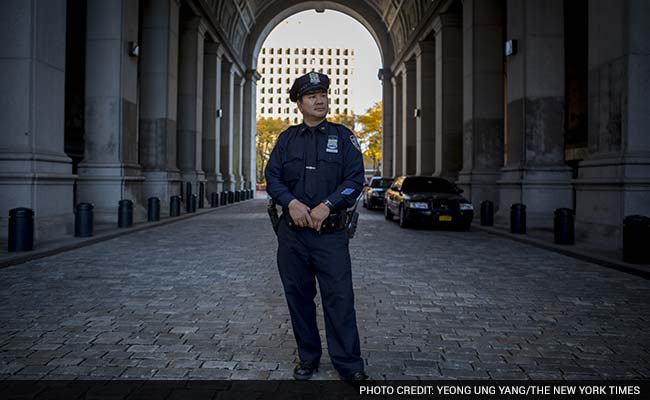 Officer Man Yam stands outside police headquarters in New York. On his subway commute, Yam realized that the disoriented man across from him was Gianclaudio Marengo.

New York: For most runners, the finish line of the New York City Marathon is the end of an arduous journey.

For Gianclaudio P. Marengo, it was just the beginning of a two-day ordeal that ended on Tuesday morning when he was found by an off-duty police officer on the subway - disheveled, confused and still in his running gear.

His race started like thousands of others, on Sunday in the predawn hours on Staten Island.

Marengo, 30, does not speak English and had never been to the city, but he was with a team of seven other runners from Italy and he had trained months for this day.

Antonio Boschini, 58, who served as a medic for the Italians, said in an interview that just getting to the race had been a victory of sorts.

Marengo was part of a group of recovering addicts from San Patrignano, a drug rehabilitation center on the Adriatic coast.

"He is certainly a fragile, vulnerable and very emotional person who after years of drug dependency found the chance to recover in San Patrignano," the center said in a statement.

Marengo was not registered to run but wore a number assigned to Boschini: 23781.

He carried a bag with a few essentials: a subway map, a card for his hotel in Queens and some food. At some point along the 26.2-mile course, Boschini said, Marengo reached into the bag for a bite to eat.

For a long stretch he ran with a partner, but Boschini said that Marengo was the least athletic of his group and by the time he crossed the finish line in Central Park, he was alone.

Officials for New York Road Runners, which organizes the race, said that the person wearing No. 23781 finished the race in 4 hours 44 minutes 27 seconds.

Marengo looked for his friends, Boschini said, but could not find them. Then he looked in his bag.

Somewhere along the course, perhaps when he pulled out the food, he had dropped both his hotel card and his subway map.

"He could not find the way to the hotel," Boschini said. "So he remained in the park."

After a few hours, the other Italians realized something was wrong.

"We went to the park but we did not find him," Boschini said.

When he did not show up for a dinner reservation, the group called the Italian Consulate. The consulate called the police.

"He spent the night in the park," Boschini said.

The Italians were scheduled to fly out of the city on Monday morning, so Marengo went to Kennedy International Airport to catch the rest of the group.

"He stayed at the airport and waited," Boschini said. "But they thought he looked homeless so they kicked him out."

By then, it was late on Monday and Marengo had nowhere to go. He boarded the subway still outfitted for the race.

While many runners, medals dangling around their necks and blue capes draped across their backs, could be seen around the city for hours after the race, by Monday night Marengo was looking a bit out of place.

On Tuesday morning, Officer Man Yam, 43, boarded the No. 2 train, heading for work in Lower Manhattan.

He was reading a Daily News article about a missing runner on his phone, when he lost reception as the train reached the 34th Street-Penn Station stop around 6:40 a.m.

"I got a seat and, literally, he is sitting across from me," Yam said. "It hit me right away based on his mannerism and what he looked like."

Yam identified himself and showed his departmental identification, saying "police" in Spanish.

He asked the man if he minded coming with him. The man nodded.
They got up to the street and Yam bought him a glazed white doughnut with coffee for $3.

He confirmed he had Marengo by pulling the photo from the newspaper's website.

"I was just doing what any person, man or woman, whether in my department or not, would do," Yam said. "What mattered the most is he smiled. He realized that he'd been found, he was in good hands."

The Italian Consulate said that, aside from minor dehydration, Marengo was in good health.

On Tuesday night, Boschini went to the hospital to pick his friend up. Together, the two were scheduled to fly back to Italy, the marathon finally over.
Comments
Italian MarathonerMarathonerNew YorkNew York City MarathonGianclaudio P. MarengoAntonio BoschiniMan Yam