Millions In US Brace For ''Life-Threatening'' Blizzards, Potential Floods

High spring temperatures will give way to heavy snow, gale-force winds and life-threatening conditions across a swathe of the central United States running from the Rockies to the Great Lakes, according to the National Weather Service. 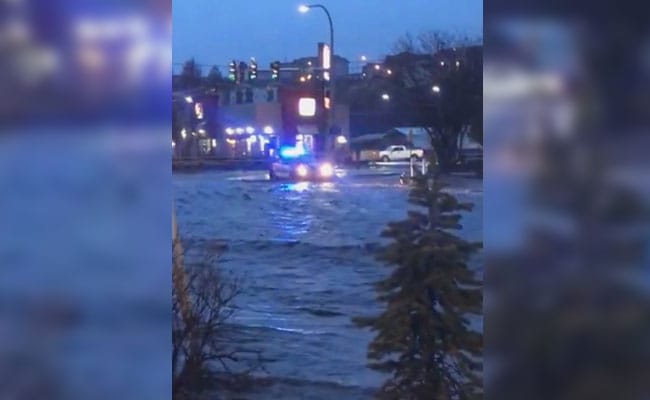 The storm is expected to bring blinding, heavy wet snow across the region. (Reuters)

A blizzard hitting the U.S. Rockies on Wednesday was forecast to move eastward over the next day, threatening to bring new flooding to the Plains states including parts of South Dakota and Missouri that are still recovering from last month's inundation.

High spring temperatures will give way to heavy snow, gale-force winds and life-threatening conditions across a swathe of the central United States running from the Rockies to the Great Lakes, according to the National Weather Service.

"This is potentially a life-threatening storm," Patrick Burke, a meteorologist with the NWS's Weather Prediction Center in Maryland, said Wednesday.

A cyclone last month dropped heavy rains over that region, causing extensive flooding along the Missouri River and more than $3 billion in damage to property and crops in Nebraska and Iowa.

Pueblo, Colorado, hit 85 degrees Fahrenheit (30 Celsius) on Tuesday, but will drop down to 25F (minus 4C) by early Thursday. Similar temperatures are forecast in Denver.

"It's slow moving. It won't push farther east until Friday," he said.

Some areas of western Minnesota and southeast South Dakota were expected to get up to 30 inches of wet, heavy snow, the NWS said.

Two factors may limit the flooding effect, forecasters said. Thawed ground will be able to absorb more precipitation than last month's frozen ground and a fall of heavy snow rather than rain will slow the runoff process.

Nearly 500 flights were canceled at Denver International Airport on Wednesday, about a quarter of its total schedule, according to FlightAware.com, an airline tracking website.

Airport officials said they had snow-removal crews in place.

The coming storm was expected to exacerbate flooding along the Missouri River in areas where dozens of levees were breached in March, exposing communities to future surges. The river was not expected to crest in areas of Nebraska, Iowa and Missouri until between three to five days after the storm.

The storm is expected to weaken and push off into the Great Lakes area and northern Michigan on Friday, bringing more rain and snow, the weather service said.