Chinese fans have watched the militarisation of football with a mixture of anger and bemusement after pictures emerged of players getting their hair shaved and throwing themselves bare-chested into the snow. 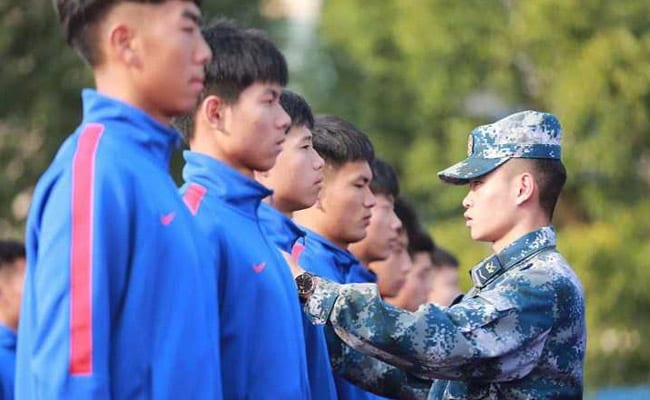 Players being inspected by a soldier during military-style training sessions in Shanghai. (AFP)

Chinese national squads and a top league team have packed young footballers off to military camps for drills and Marxist-style "thought education" as a campaign to promote Communist Party values spreads even into the sporting world.

Chinese fans have watched the militarisation of football with a mixture of anger and bemusement after pictures emerged of players getting their hair shaved and throwing themselves bare-chested into the snow.

The Chinese Football Association (CFA) spirited away more than 50 under-25 national squad players in October for several weeks of intensive army drills, swapping their football boots for combat boots and military fatigues.

The move, underlining desperation to improve the perennially underachieving Chinese national side, was particularly controversial because it meant some of China's finest young players were not involved in the final games of the league season.

A second batch of players was packed off in early November, and this week a national squad of under-19s was set to don camouflage and head to the barracks, suggesting that the boot camps may become a fixture.

Under the watchful eye of the drillmasters of airforce unit 94778, the young players were subjected on Monday to "thought-education", the club said on China's Twitter-like Weibo platform. 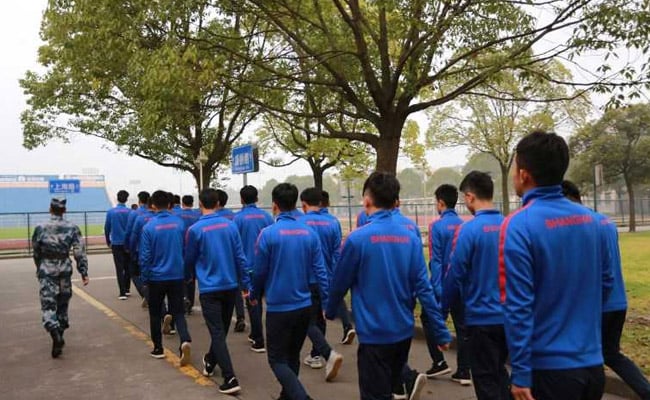 Players marching with a soldier during military-style training sessions. (AFP)

The players were also plonked down to watch the evening news on state television -- a nightly hymn to the Communist Party -- before hitting their bunks.

The CFA has been characteristically coy on the thinking behind the boot camps, but the Beijing Evening News said: "In several previous warm-up matches, some of the national team were criticised for not working hard and having no sense of honour."

The Beijing Youth Daily, citing the CFA, said that the camps will "strengthen young players' ideology".

President Xi Jinping has conducted a broad campaign to bolster the ruling Communist Party that has drawn comparisons to past mass political campaigns under former leader Mao Zedong.

Government departments, businesses and organisations across the country have signed up to the drive by conducting indoctrination sessions focusing on Marxist values and "Xi Jinping Thought".

Earlier this year, players for the national team began appearing in matches with bandages covering their tattoos, which the Xi government frowns upon in its purity campaign.

But frustrated Chinese football fans accused the CFA of putting politics before football as it took dozens of domestic players out of action for the critical last few games of the season.

Pictures subsequently emerged online of the under-25 players with buzz cuts and wearing military garb as they sat in a whitewashed room watching the senior national team's 0-0 with India on television. A red banner at the front of the room exhorted them to be upstanding members of the public.

Soccer News reposted pictures on Weibo said to be of the players baring their teeth and leaping half-naked into the snow.

China's World Cup-winning coach Marcello Lippi, whose final assignment with the team will be the Asian Cup in January, has not commented on the army-style initiative.

As part of Xi's efforts to make the country a footballing powerhouse, China made the 70-year-old Italian one of the best-paid coaches in the world when they hired him in October 2016.

But after an initial bounce, the team have won just once in their last five games and are stewing in 76th in the FIFA rankings, two spots below war-torn Syria.