The visit, which was supposed to include trips to Mongolia and South Korea, was cut short after President Donald Trump was diagnosed with COVID-19. 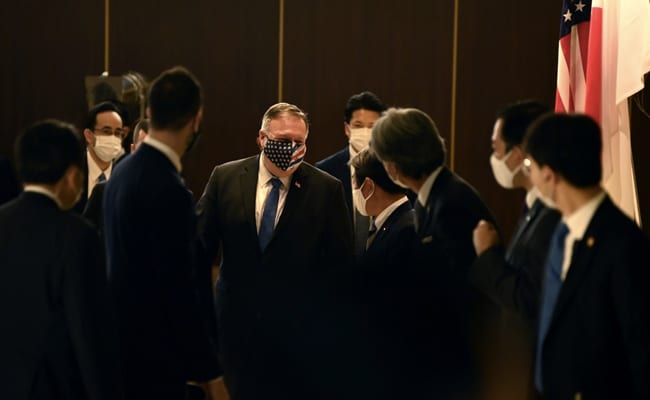 US Secretary of State Mike Pompeo on Tuesday visited Toyko to meet with some of Washington's closest allies in Asia, Japan, Australia and India, to shore up support against what the United States says is China's dangerous and growing regional influence.

The visit, which was supposed to include trips to Mongolia and South Korea, was cut short after President Donald Trump was diagnosed with COVID-19. It is Pompeo's first trip to East Asia since July 2019 and comes as ties between the United States and strategic rival China are at their worst in decades.

The one-day visit includes a meeting of foreign ministers of the Quad grouping of nations: the United States, Australia, India and Japan.

While Washington has been looking to build support among Asian allies against Beijing, analysts have said China's neighbours want to avoid a direct confrontation because of economic ties.

Following a meeting between Pompeo and his Australian counterpart, Marise Payne, the US State Department said the two discussed worries about China's regional "malign activity" - language likely to elicit a response from Beijing.

"The Secretary and the Foreign Minister also discussed their shared concerns regarding the People's Republic of China's malign activity in the region," a State Department official said in the statement.

However, Payne's statement did not even mention China.

"Whether it is individual human rights, market-based economies, countering disinformation or building greater resilience into our supply chains, our common values and interests mean we share a vision for a free, open and prosperous Indo-Pacific," she said on social media.

When Pompeo met Japan's foreign minister he said new Prime Minister Yoshihide Suga was a "force for good" and would strengthen the relationship between Washington and Tokyo. He was due to meet Suga later on Tuesday.

China has denounced the Quad as an attempt to contain its development.

The Quad meeting is unlikely to yield a specific action plan, although the gathering itself may serve as a warning to China and play to its fears that the grouping might one day grow into a formalised structure like NATO, experts have said.

Washington and Beijing, the world's top two economies, are at loggerheads over a wide range of issues from Beijing's handling of the coronavirus to its imposition of a new security law in Hong Kong and ambitions in the South China Sea.

Most Asian allies have been pleased with Washington's toughness toward their regional rival China, but have not so eagerly welcomed Trump and Pompeo's highly charged recent rhetoric and remain wary of going too far in antagonising China.

Part of the problem for Washington's Asian allies is their dependence on China for trade. China was the top destination for Australian exports in 2019, the No.2 destination for Japanese exports and the No.3 destination for Indian exports, according to IMF direction of trade statistics compiled by Refinitiv.

Japan told the United States it would like to deepen cooperation in the field of cyber security, according to a statement from Tokyo's foreign ministry.

The Unites States has said it greatly values the meeting of the Quad grouping of foreign ministers as a platform to strengthen its solidarity against China with regional allies.

"We're hoping to have some significant announcements, significant achievements," Pompeo told reporters at Joint Base Andrews in the United States before departing for Tokyo, but he declined to say what they would be.