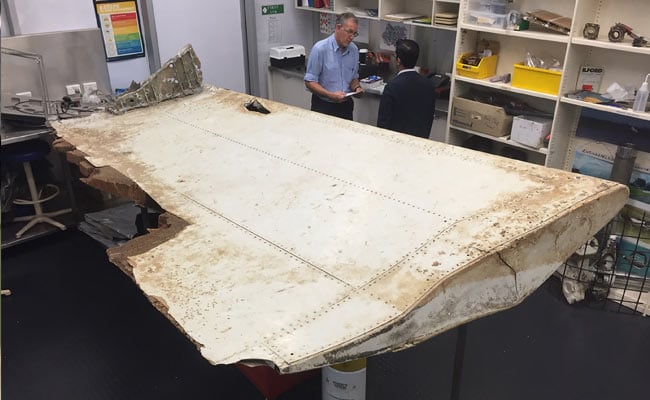 Debris recovered from the missing MH370 indicates the right wing flap was positioned for cruising. (file)

Malaysia Airlines Flight 370, missing for more than two years, may have plummeted at 25,000 feet a minute in its final moments and wasn't configured to land when it hit the water, according to the latest analysis by Australian investigators.

Debris recovered from the missing Boeing Co. 777 jet indicates the right wing flap was positioned for cruising when it separated from the plane, the Australian Transport Safety Bureau said in a report Wednesday. At the same time, the aircraft's final satellite communications suggest MH370 was in a fast and ever-increasing rate of descent, the ATSB said.

The report weakens speculation that someone may have been at the controls to the end, gliding MH370 beyond the current search area in the southern Indian Ocean and landing the plane in a controlled ditch. The plane vanished from radar on March 8, 2014, en route to Beijing from Kuala Lumpur with 239 people on board and its search is the world's longest for a missing passenger jet.

Some flight simulations after the plane ran out of fuel produced a descent rate "outside the aircraft's certified flight envelope," the ATSB said in its report. The plane lost at least 3,800 feet of altitude and that accelerated up to 25,000 feet every minute, the ATSB said.

Simulations suggest the aircraft could have reversed track and flown back north even as it fell from the sky, the ATSB said.

Investigators are looking at more than 20 items of debris, according to Wednesday's report. The governments of Australia, Malaysia and China have said search will be suspended when the 120,000 square-kilometer search area in the southern Indian Ocean has been fully covered in January.


(This story has not been edited by NDTV staff and is auto-generated from a syndicated feed.)
Comments
MH370MH370 Air CrashMalaysia Airlines Flight 370MH370 Search Operations