"Popo," as locals in central Mexico call the volcano with a mixture of affection and fear, has been acting up in recent days. 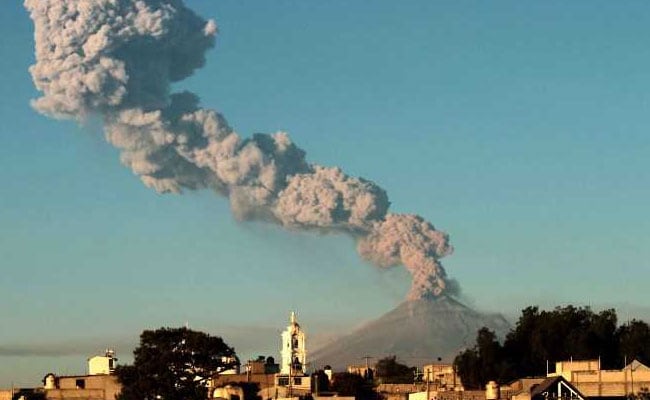 Popocatepetl has not had a massive eruption in more than 1,000 years.

Mexico raised the warning level for the Popocatepetl volcano to one step shy of a red alert Thursday, after it repeatedly spewed ash, smoke and lava into the air.

"Popo," as locals in central Mexico call the volcano with a mixture of affection and fear, has been acting up in recent days.

Authorities raised the alert level to "yellow phase three" -- one step short of ordering an evacuation -- after it exhaled a thick cloud of ash and smoke and spewed glowing lava from its crater on Thursday morning.

It was the latest in several days of increased activity that have residents warily eyeing the volcano from the surrounding villages in Puebla state.

"The other day the explosion was really loud, louder than usual. It scared us enough to get up from lunch and go outside to see. The whole crater was on fire," Julio Cuautli, 68, a resident of the village of Santiago Xalitzintla, told AFP.

Popocatepetl has not had a massive eruption in more than 1,000 years.

But it has shown increased activity over the past 25 years, and is considered one of the most dangerous volcanoes in the world because some 25 million people live within a 100-kilometer (60-mile) radius.

Several villages surround the volcano, and a major eruption could have devastating effects as far away as the state capital, Puebla, population 1.5 million, and Mexico City, whose metropolitan area is home to 21 million people.

The yellow warning means "remain alert and prepare for a possible evacuation," according to the warning system developed by Mexico's National Disaster Prevention Center.

The next step, a red alert, means a mandatory evacuation. But authorities said they were not considering that for now.

"We're seeing a change in (the volcano's) behavior... (and) as a precautionary measure we've taken the decision to modify the alert level," said David Leon, head of the Civil Protection agency.

The agency called on people to stay away from the volcano, "especially the crater."