Donald Trump has railed against what he calls "chain migration," which the president contends has resulted in fiercer competition for blue-collar jobs for native-born Americans and introduces increased national security concerns. 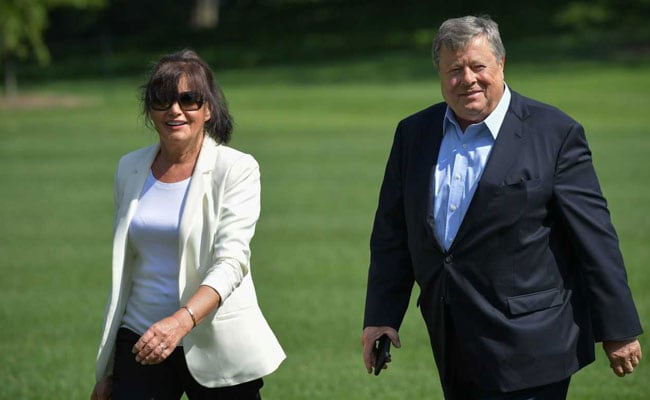 Viktor and Amalija Knavs are from Slovenia which allows dual citizenship.

First lady Melania Trump's parents became US citizens in a naturalization ceremony in New York on Thursday, completing a years-long immigration process even as President Trump has called for new laws to bar Americans from sponsoring parents and other relatives.

Michael Wildes, an attorney for Viktor and Amalija Knavs, who had been living in the country as legal permanent residents after leaving their native Slovenia, confirmed that his clients took the oath of citizenship.

News photographers captured images of the couple as they arrived at a Manhattan federal building accompanied by Department of Homeland Security officers. Wildes did not elaborate, citing the couple's privacy.

"Citizenship was just awarded," Wildes said. "They have prevailed in a wonderful journey as millions have."

Stephanie Grisham, a spokeswoman for the first lady, also declined to comment "as they are not part of the administration."

The Washington Post first reported in February that the Knavs had gained legal permanent residency and that legal experts believed it was likely that the first lady had sponsored their applications for family-based green cards.

Wildes said the Knavs satisfied the requirement that permanent residents hold their green cards for five years before they can apply for U.S. citizenship. It is unclear when the Knavses first moved to the United States, but by late 2007, Viktor Knavs was listed in public records as residing at Mar-a-Lago, Trump's private club in Palm Beach, Florida.

The Knavses received no special treatment because of their relationship with the first family, Wildes told reporters in New York.

"The application, the process, the interview was no different than anybody else's, other than the security arrangements to facility today," he said. "This is an example of it going right. They're very excited."

Questions about the couple's immigration status intensified last year as Trump mounted a push to slash legal immigration, including provisions to constrict the ability of U.S. citizens from sponsoring their parents, adult children and siblings for green cards.

In fiscal 2016, the United States granted nearly 1.2 million green cards, of which 174,000 went to parents of U.S. citizens, according to the Department of Homeland Security.

Trump has railed against what he calls "chain migration," which the president contends has resulted in fiercer competition for blue-collar jobs for native-born Americans and introduces increased national security concerns.

Studies have shown, however, that immigrants have boosted the economy and commit crimes at lower rates than the native born.

Trump falsely asserted in November that Uzbekistan-born Sayfullo Saipov - who had gained legal permanent residency in an annual visa lottery before allegedly killing eight people on a bike path in New York - had brought nearly two dozen relatives into the country on family visas. Saipov has pleaded not guilty and his trial is set for next year.

"We want to get rid of chain migration," Trump said at the time.

The Senate defeated several immigration bills in the spring, including one that included the proposals backed by Trump. A spokesperson for Sen. Chuck Grassley, R-Iowa, who sponsored that bill, did not respond to a request for comment, nor did spokespeople for Sens. Tom Cotton, R-Ark., and David Perdue, R-Okla., who have authored similar legislative proposals.

Critics said the Knavs' ability to secure green cards and citizenship smacks of hypocrisy given the president's hard-line immigration stance.

"This is the most anti-immigration administration probably in history of the country except when it comes to this family, and the hypocrisy is just stunning," said David Leopold, an immigration attorney in Cleveland. "He and his administration are on a crusade to rid the country of immigrants, particularly immigrants of color. What can you say when the first lady and her family have such an easy time?"

A White House spokesman declined to comment when asked about the criticism Thursday. The president is on a working vacation this week at his private resort in Bedminster, New Jersey.

Supporters of Trump's efforts to slash family-based migration said the first lady and her parents should not be criticized for taking advantage of current laws.

"Until the rules change, the rules are there to be used," said Mark Krikorian, executive director of the Center for Immigration Studies, which advocates for lower immigration levels.

"If they didn't break the rules, there's really no issue here," Krikorian said. "I want the rules to be changed for the future. But that doesn't delegitimize anyone in categories I want to get rid of who are already here fair and square."

The first lady's own immigration path also has been scrutinized. A former model known as Melania Knauss, she arrived in New York in 1996 and began dating Trump in 2000.

In 2001, Knauss was granted a green card in the elite EB-1 program, which was designed for renowned academic researchers, multinational business executives or those in other fields, such as Olympic athletes and Oscar-winning actors, who demonstrated "sustained national and international acclaim."

The year that Knauss got her legal residency, only five people from Slovenia received green cards under the EB-1 program, according to the State Department.

The Knavs raised Melania Trump in the rural town of Sevnica when Slovenia was a part of communist Yugoslavia. Viktor Knavs, now 74, was a car dealer while Amalija Knavs, now 73, worked in a textile factory.

In an interview on CNN in June, amid a public outcry over the Trump administration's policy of separating immigrant families at the border, Wildes said that his immigration firm was in "overdrive because of the challenges that are going on here."

Asked by host Don Lemon if the Knavs's successful journey to join their daughter in the United States amounted to "family reunification," Wildes replied: "I think so, don't you? And I'll do it again and I'll do it tomorrow. I'll do it for people in provocative ways."