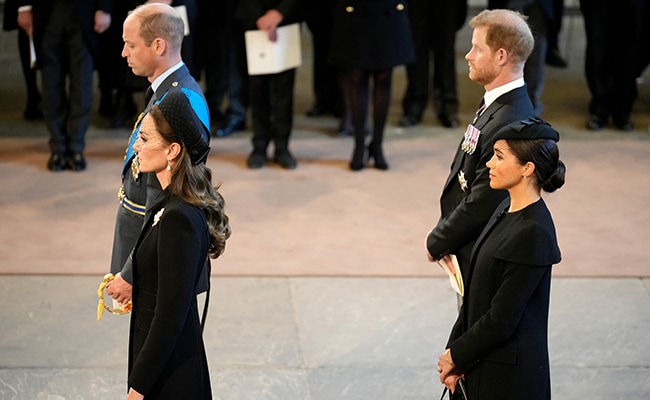 The Queen's funeral will take place at London's Westminster Abbey on September 19, and around 7,50, 000 people along with world leaders and dignitaries will be gathering to pay homage to her.

Royal Family members are expected to wear military uniforms, suits, and black outfits. If we run the pages of history, there's another important piece of the mourning attire that the Royals wear - the veil.

During Prince Philip's funeral also Kate Middleton wore a black-netted veil. And, now it is expected that Kate along with Meghan is going to wear the veil for the Queen's funeral.

According to Page Six, the accessory and the meaning attached to its wearability dates back to the Victorian Era. Queen Victoria wore a veil for the rest of her life following the death of her beloved husband, Prince Albert.

Page Six further quotes Royal historian Jessica Storoschuk, who believes that the custom can be traced long before that.

The online portal quoted her as saying - "The tradition of mourning veils dates back several centuries, and has a basis in monastic dress," she said, adding that the piece "was often considered to be 'armour' and would shield their grief from the public."

The Queen and her sister Princess Margaret wore full black veils to mourn their father King George VI in 1952.

Wallis Simpson did the same when her husband, the Duke of Windsor (formerly King Edward VIII) passed away in 1972.

However, Queen Elizabeth II didn't wear one to mourn the death of her husband.

According to Page Six, along with veils, pearl jewellery is also expected to make an appearance at the funeral. Queen Elizabeth II was known for her extravagant collection of pearls.

Earlier this week, Queen Consort Camilla Parker Bowles, Kate Middleton, and Meghan Markle paid tribute to her by wearing pearl jewellery -- including pieces that belonged to the Queen.