From "smart and sharp" Elizabeth Warren, to "radical" Bernie Sanders and "charismatic" Cory Booker, Megan Rapinoe is finding plenty to rally behind in the Democratic field. 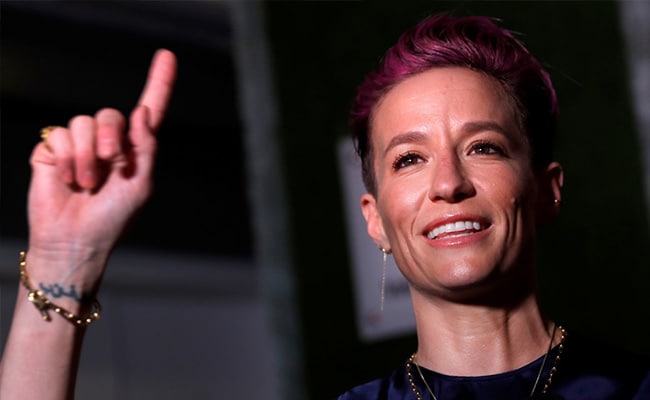 "Get me on the bus, get me on one of those planes," Megan Rapinoe said (Reuters)

From award shows to magazine covers, it can often feel as though Megan Rapinoe is everywhere - and soon, that might include rallies for Democratic presidential candidates.

The U.S. women's national soccer team's fiery co-captain is not running for office. But after helping the Americans clinch a second consecutive World Cup title, the 34-year-old winger is setting her sights on helping the 2020 presidential field.

From "smart and sharp" Elizabeth Warren, to "radical" Bernie Sanders and "charismatic" Cory Booker, Rapinoe is finding plenty to rally behind in the Democratic field.

"I think the most important thing is to get that maniac out of the White House," Rapinoe told Reuters on Monday at Sports Illustrated's Sports person of the Year awards, where she was bestowed the top prize.

The Ballon D'or winner caught the ire of U.S. President Donald Trump during her team's World Cup run, after an expletive-punctuated clip of her saying she would not visit the White House if they won the tournament emerged before the team's quarter-final match.

On Monday, she reiterated that now-famous pledge and said she was ready to hit the road to rally support for his eventual opponent.

"Get me on the bus, get me on one of those planes," Rapinoe said. "I want to rile people up! Something about me is motivating people to do something, or people are interested.

"If I've got to knock on doors to get people to vote, I'm down."

She'll have little time to spare in 2020: she and her team will head to Olympic qualifying matches early next year, before a May trial date for the U.S. squad's gender discrimination lawsuit against their governing body.

Rapinoe has emerged as a social activist during her career, notably taking a knee during the national anthem in 2016 in solidarity with Colin Kaepernick's protest against police violence.

During her acceptance speech at the Sports Illustrated awards, Rapinoe called for greater racial and gender diversity at the publication, and criticised the relative dearth of female Sportsperson of the Year honorees.

Rapinoe and 23-time Grand Slam winner Serena Williams are the only two female athletes honored independently with a Sportsperson of the Year prize in the last two decades.

"Sports Illustrated needs to look at itself and think, 'what kind of story are we telling our subscribers and are we telling the country about sports in America?" Rapinoe told Reuters. "As a sports news organization, what news are you reporting? There seems to be a heavy bias on the guys."