Meet the super Sikh of Toronto 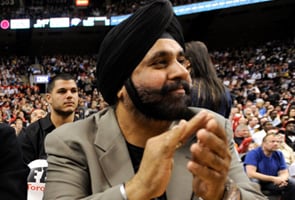 Toronto: As the global meltdown grounded the auto industry, Toronto's biggest Indian car man, Nav Bhatia, only thrived. The multimillionaire Sikh has also been helping change stereotypes about Indians in Canada after being mistaken for a cab driver once.

"We have continued to post better results thanks to our clients," beams Bhatia who landed here from Delhi in 1984 and is the biggest Indian origin Hyundai car dealer in Canada today.

Flip through any newspaper and you find him featured in full-page auto ads with his trademark right finger pointed up.

He is friends with the who's who of Canada, including BlackBerry co-CEO Jim Balsillie. "We are very good friends. Jim loves Indian food. He is very simple and cuts his lawn grass himself."

The 58-year-old Sikh is also the most famous Indian face on the North America NBA circuit with his official anointing as the 'Super Fan' of the city-based NBA team called Toronto Raptors for creating a record of watching over 500 games.

"I am the only Super Fan anointed by the NBA. Each season, I spend $300,000 to buy 3,000 seats out of the total 20,000 for games held in Toronto and distribute them free to Indian kids to watch these games from front rows. The images of our kids in turbans and Indian dress beamed into millions of homes make white people aware of our identity," he says.

"Most NBA players and referees know me personally because of my turban. That's how I used the NBA to promote awareness about our identity. I took Balsillie and his son with me to the Raptors' game against Lakers here Dec 19."

The top auto man is also credited with bringing Bollywood to Canada, with the screening the film 'Hum Saath Saath Hain' here in 1999.

"It became the first Bollywood film to run at six mainstream theatres in the Toronto area. Till then no Cineplex would touch an Indian film, but I changed that," says Bhatia who has brought dozens of Indian films here since then.

Over the years, he has also staged live shows of the likes of Amitabh Bachchan, Aamir Khan, Shah Rukh Khan, A.R. Rahman and other stars at the Air Canada Centre in Toronto.

"Through Bollywood films and live shows, I have succeeded in telling Canadians that we Indians have a robust culture of entertainment and solid identity. My Indian identity is very important to me."

In fact, it was a hurtful remark in 1998 that forced Bhatia to shell out a fortune to use the NBA and Bollywood to promote his Indian identity among white people.

"I was walking into a Bell cellphone repair centre when a white guy, who was talking on the phone, said loudly: 'Honey, I have to go now, my cab is here.' Seeing my turban, this guy thought I am a cab driver. I was so hurt that I decided to do anything - spend any money - to change stereotypes about us," says Bhatia. He thinks his efforts have paid off.

"Though I held a degree in mechanical engineering from California State University, I couldn't find a job because of my turban. Finally, a Chinese car dealer gave me a break as a salesman. Within three months, I sold 127 cars and was promoted as manager," he narrates.

Promoted
Listen to the latest songs, only on JioSaavn.com
Impressed with his track record, Hyundai offered him to turn around a troubled dealership. Bhatia not only turned it around within a year but also bought it in 1989.

There was no looking back as Bhatia went on to break one ceiling after another.