Meet The Sikh Politician Who Might 'Out-Trudeau Justin Trudeau' 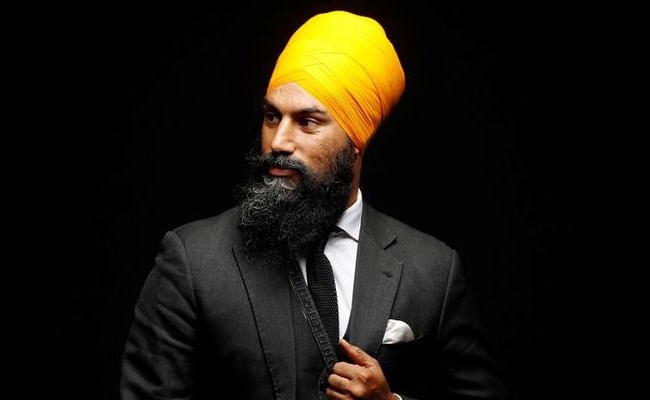 Jagmeet Singh is an Instagram star and a symbol of the success of Canada's Sikhs.

Ottawa: Canada's latest political phenomenon is just 38. He's a dapper lawyer who wears bespoke three-piece suits, rides his bike to work and has been featured in GQ. He also sports a long beard and wears pastel-colored turbans and a kirpan, a ceremonial dagger, both integral elements of the Sikh religion.

Meet Jagmeet Singh, who is shaking up the lackluster race to lead Canada's left-leaning New Democratic Party, the country's third-largest party. His backers say he could eventually pose a political threat to Prime Minister Justin Trudeau and the governing Liberal Party.

Singh, until now the deputy leader of the New Democrats in the provincial legislature in Ontario, is the latest in a line of Sikh Canadians who have made a big impact on the country's political scene, a remarkable achievement for a minority that in the 2011 census accounted for less than 1.5 percent of Canada's population.

Four members of Trudeau's Cabinet are Sikh, including Harjit Singh Sajjan, who serves as Canada's minister of national defense.

Trudeau quipped recently there were more Sikhs in his Cabinet than in Indian Prime Minister Narendra Modi's Cabinet. (Sikhism is the fourth largest religion in India, but Sikhs make up just 2 percent of India's population.)

Canada's Sikhs numbered 455,000 in the 2011 census, with the biggest concentrations in British Columbia and the Toronto area. But the political and economic success of the Sikh diaspora here makes Canada a major draw for Sikhs in India.

"For Sikhs across the world, Canada is seen as one of the best places to live," says Balpreet Singh, legal counsel and spokesman for the World Sikh Organization of Canada. "If you asked anyone in Punjab where they would like to live if they go abroad, the first choice is Canada."

Balpreet Singh, a cousin of Jagmeet's, said in an interview Sikhs have also succeeded in the United States but have faced more discrimination, including a series of hate crimes in which Sikhs have been mistaken for Muslims. "We don't have anything here like you have in America."

Shachi Kurl, executive director of the Angus Reid Institute, a polling firm based in Vancouver, said Jagmeet Singh appeals to many of the same voters who made Trudeau's victory possible in 2015. "He appeals to a youth demographic, and he appeals to minority communities," Kurl said. "Where Justin Trudeau talks about diversity being our strength, Jagmeet Singh is the embodiment of that. He can almost out-Trudeau Justin Trudeau."

Sikhs first arrived in Canada at the end of the 19th century but soon found themselves unwelcome. In a now-famous incident in 1914, when the Japanese ship Komagata Maru landed at Vancouver harbor with 376 mostly Sikh passengers, authorities refused to allow the would-be immigrants to disembark. After a court battle, the passengers were expelled from Canada.

In May 2016, Trudeau formally apologized for the incident.

The real growth in the number of Sikhs and other South Indians began in the 1970s when the government of Pierre Trudeau, Justin's father, relaxed Canada's immigration laws.

Other challenges soon arose. In the late 1980s, Baltej Singh Dhillon's application to join the Royal Canadian Mounted Police was denied because the force's dress code banned him from wearing a turban in place of the traditional Stetson hat.

After public pressure, the government relented and changed the policy, and Dhillon joined the force. His story has been marked by the Canadian Broadcasting Corp. in a documentary on the 150th anniversary of Canadian Confederation.

Brought up in Newfoundland, where his father studied medicine, and later in Windsor, Ontario, Jagmeet Singh said the racism he faced as a child made him sensitive to victims of discrimination and motivated his career choice as a defense lawyer. He sees his personal style as a tool to talk about these issues.

"A beard and a turban sometimes conjure up negative associations, but if you see someone with a lime-colored, bright orange or pink turban, it disarms people's stereotyped notion of this image," he told GQ.

At an all-candidates leadership debate held by the New Democrats in June, Singh said his identity would be a vote-getter. "I can connect with new Canadians in ways that others on this stage simply cannot," he said. As he mulled his leadership bid this spring, he was featured on a popular TV show hosted by comedian Rick Mercer. Singh taught the host how to tie a turban.

He was first elected in the 2011 Ontario provincial election; in his interview with GQ, he said he was inspired to run for office after doing human rights work as a lawyer for underrepresented communities. Singh's policies include a vow to raise corporate taxes and oppose expansion of the Kinder Morgan pipeline from Alberta to the British Columbia coast, which pleases environmentalists.

Although he has come out in favor of same-sex marriage and women's abortion rights, Singh has been criticized for favoring an exemption from mandatory motorcycle helmet laws for Sikhs and for failing to actively support Ontario's sex education curriculum, aligning himself with conservative immigrant communities.

Party members in Quebec have been critical of Singh for wearing a turban and kirpan and say he will hurt the party's electoral chances in the largely French-speaking province. "To have a leader who wears ostentatious (religious) symbols, we aren't ready," Pierre Dionne LaBelle, a former New Democrat member of Parliament from Quebec told Le Devoir, a French-language newspaper.

The Quebec National Assembly already bans the wearing of the kirpan, the only provincial legislature to do so, and is mulling proposed legislation banning people from providing or receiving public services if they cover their faces. A recent Angus Reid survey showed that while 56 percent of all Canadians would vote for a party leader who wears a religious head covering, only 36 percent of Quebecers would do so.

New Democratic Party members will begin casting ballots in the online election in mid-September in what could be several rounds of voting. A final result is expected by mid-October. Predicting the outcome is difficult because voting is limited to party members. One indication of Singh's organizational strength: His campaign raised more money by far than his three opponents in the period that ended June 30.

Observers warn that despite his youth and lack of national experience, it would be unwise to underestimate Singh's chances at victory.

Promoted
Listen to the latest songs, only on JioSaavn.com
Suggestions that Singh is all style and no substance recall early criticisms of Trudeau before his election win in 2015, writes Tim Harper, a columnist with The Toronto Star. "Questions about Singh's style, depth and debating skills sound surprisingly like the questions being asked about Trudeau four years ago."