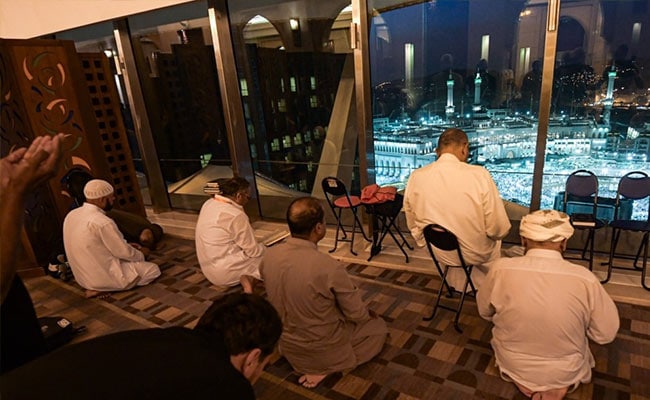 Muslims pray and read the Koran in a luxury hotel room with a view overlooking the Kaaba. (AFP)

Five-star hotels with views of Islam's holiest site and luxury hajj pilgrimage packages are attracting a super-wealthy clientele and establishing Mecca as the capital of premium religious tourism.

At one of the high-end establishments, the main selling point is clear according to a representative: "We have three prayer rooms overlooking the Kaaba."

The Kaaba is a cube structure that is the focal point of Islam, draped in a gold-embroidered black cloth, towards which Muslims around the world pray.

"Guests dream of seeing the Kaaba 24-hours a day," added the hotelier.

In a room on the 29th floor, male worshippers gathered to pray their eyes fixed on the holy site below as the hajj was in full swing. 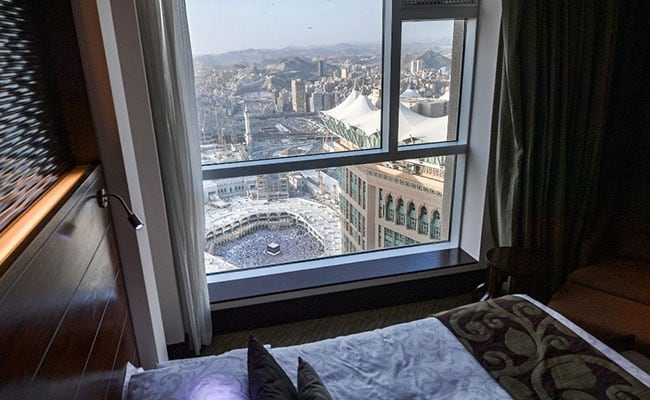 View from a room in a luxury hotel overlooking the Kaaba. (AFP)

Some 2.5 million faithful have travelled to Mecca from across the world to take part in this year's pilgrimage -- one of the five pillars of Islam -- which began on August 9 and ends on Wednesday.

At another similarly prestigious hotel, guests are offered a "pilgrimage area" complete with a view "of Islam's holiest site... allowing (them) to lift their spirits".

Luxury accommodation has mushroomed in Mecca in recent years with a proliferation of high-end skyscraper hotels in the vicinity of the Grand Mosque -- often with "panoramic" views.

The premium properties were fully booked for the duration of this year's  hajj and next year's pilgrimage, but also for a dozen days before and after.

Room rates are more than $1,000 per night in the high season. 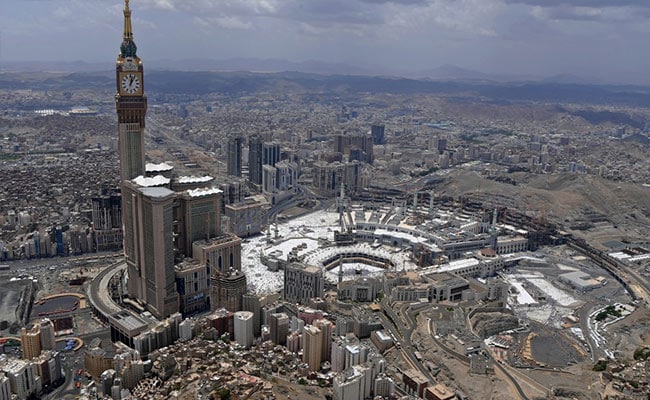 An aerial view of the Kaaba (the Cube), Islam's holiest shrine. (AFP)

Mecca's most opulent hotels are located within the vast Abraj al-Bait (Kaaba Towers) skyscraper complex which opened to guests in 2012, or near it.

The development is home to one of the tallest towers in the world with its distinctive clockface 35 times the size of the timepiece on London's Queen Elizabeth Tower, commonly known as Big Ben.

Created by the Binladin Group, which has ties to the family of slain  Al-Qaeda founder Osama bin Laden, the development saw the demolition of the historic Othoman Ajyad fort which provoked a diplomatic spat between Turkey and Saudi Arabia.

Experts estimate that as many as 95 percent of Mecca's historic buildings have been demolished to make way for modern-era construction.

And though luxury conditions are available for the super-rich, many pilgrims are lodged in basic, sometimes less than sanitary dormitories.

A number of tour operators even offer VIP packages for an "exceptional pilgrimage" with a room overlooking the Kaaba" with a price tag of several thousand dollars.

Academic Luc Chantre, author of several books about contemporary Mecca, said that "since the 1930s, the pilgrimage has increasingly become a religious tourism phenomenon".

"The growth of Mecca's infrastructure has ocurred alongside the development of non-religious activities like shopping, cultural tourism and the showcasing of natural areas." 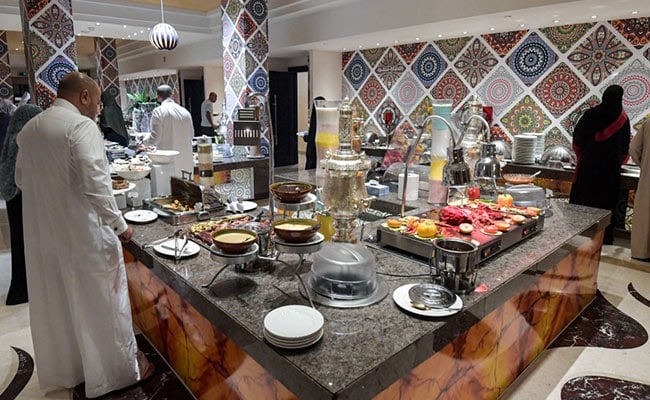 Buffet at a restaurant at a luxury hotel overlooking the Kaaba. (AFP)

The kingdom, which has previously been largely closed to foreigners, has put tourism at the heart of its "Vision 2030" reform programme intended to reduce dependency on oil.

Plans have been announced to transform 50 Red Sea islands into luxury resorts as well as for an attraction park in Riyadh.

But the desert kingdom, which imposes strict conservative social rules, is seen as an improbable mainstream tourist destination.

Religious tourism is however seen as a potential boom industry as Riyadh expects to welcome 30 million pilgrims between 2019 and 2030 for the hajj and lesser umrah pilgrimage which can be undertaken year-round.

The two pilgrimages bring in billions of dollars annually.

(Except for the headline, this story has not been edited by NDTV staff and is published from a syndicated feed.)
Comments
Meccareligious tourismhajj pilgrimage