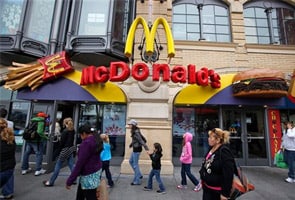 Dearborn, Michigan: McDonald's and one of its franchise owners agreed to pay $700,000 to members of the Muslim community to settle allegations a Detroit-area restaurant falsely advertised its food as being prepared according to Islamic dietary law.

McDonald's and Finley's Management Co. agreed on Friday to the tentative settlement, with that money to be shared by Dearborn Heights resident Ahmed, a Detroit health clinic, the Arab American National Museum in Dearborn and lawyers.

Ahmed's attorney, Kassem Dakhlallah, told The Associated Press on Monday that he's "thrilled" with the preliminary deal that's expected to be finalized March 1. McDonald's and Finley's Management deny any liability but say the settlement is in their best interests.

The lawsuit alleged that Ahmed bought a chicken sandwich in September 2011 at a Dearborn McDonald's but found it wasn't halal - meaning it didn't meet Islamic requirements for preparing food. Islam forbids consumption of pork, and God's name must be invoked before an animal providing meat for consumption is slaughtered.

Dakhlallah said there are only two McDonald's in the United States that sell halal products and both are in Dearborn, which has one of the nation's largest Arab and Muslim communities. Overall, the Detroit area is home to about 150,000 Muslims of many different ethnicities.

The locations advertise that they exclusively sell halal Chicken McNuggets and McChicken sandwiches and they have to get those products from an approved halal provider, Dakhlallah said. He said there was no evidence of problems on the production side, but he alleges that the Dearborn location on Ford Road sold non-halal products when it ran out of halal.

Dakhlallah said he was approached by Ahmed, and they conducted an investigation. A letter sent to McDonald's Corp. and Finley's Management by Dakhlallah's firm said Ahmed had "confirmed from a source familiar with the inventory" that the restaurant had sold non-halal food "on many occasions."

After they received no response to the letter, Dakhlallah said, they filed a lawsuit in Wayne County Circuit Court in November 2011 as part of a class action.

The AP left messages on Monday afternoon for attorneys representing the corporation and the franchise.

In the settlement notice, Finley's Management said it "has a carefully designed system for preparing and serving halal such that halal chicken products are labeled, stored, refrigerated, and cooked in halal-only areas." The company added it trains its employees on preparing halal food and "requires strict adherence to the process."

He said although Ahmed believes McDonald's was negligent, there was no evidence that the chain set out to deceive customers.

"McDonald's from the very beginning stepped up and took this case very seriously," Dakhlallah said. "They made it clear they wanted to resolve this. They got ahead of the problem."

The lawsuit covers anyone who bought the halal-advertised products from the Ford Road restaurant and another Dearborn McDonald's with a different owner between September 2005 and last Friday. Since that would be impossible to determine, Dakhlallah said both sides agreed to provide money to community-based charities that benefit members of this group.

The other location on Michigan Avenue wasn't a defendant or a focus of the investigation, Dakhlallah said.

Dakhlallah said he believes it's the first lawsuit of its kind related to McDonald's and halal food.

Promoted
Listen to the latest songs, only on JioSaavn.com
In 2002, McDonald's agreed to donate $10 million to Hindu and other groups in the U.S. to settle lawsuits that accused the chain of mislabeling french fries and hash browns as vegetarian. The vegetable oil used to prepare the items had contained traces of beef for flavoring purposes.