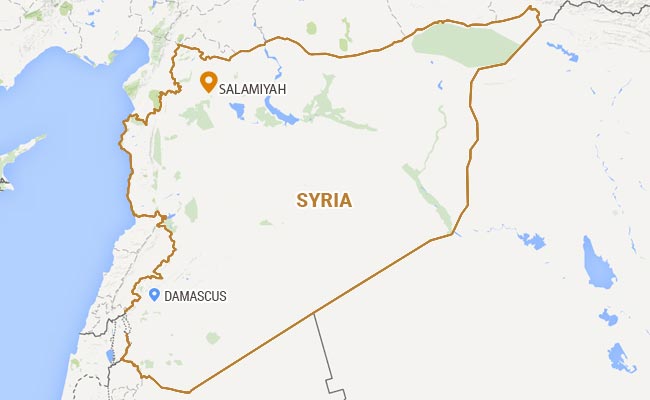 A massive bomb blast claimed by the ISIS killed at least 44 people and wounded many in Syria.

Qamishli: A massive bomb blast claimed by the ISIS killed at least 44 people and wounded dozens on Wednesday in the Kurdish-majority Syrian city of Qamishli.

It was the largest and deadliest attack to hit the city since the March 2011 outbreak of Syria's conflict.

State media gave a toll of 44 dead and 140 injured in the bombing, which hit a western district of the city where several local Kurdish ministries are located.

The Britain-based Syrian Observatory for Human Rights monitor gave a toll of 48 dead, adding that children and women were among those killed.

Kurdish officials said the attack was carried out by a suicide bomber driving an explosives-laden truck, adding that the blast detonated a nearby fuel container.

An AFP journalist saw devastating scenes in the bomb's aftermath, with distraught civilians, some covered in blood, staggering through rubble past twisted metal and the burned-out remains of cars.

One man running along the streets was completely covered in blood, his shirt drenched red.

He was gripping the arm of a small boy whose face was grey and red with blood and dust.

They ran past a hysterical woman who was crying and screaming, her clothes torn. A girl and boy stood next to her, apparently in shock.

Children could be heard screaming as smoke rose from small fires that continued to burn amongst the rubble.

Civilians and local security forces with guns slung across their backs worked to carry the dead and wounded from the remains of damaged and destroyed buildings.

The ISIS claimed the attack in a statement circulated on social media, calling it "a response to the crimes committed by the crusader coalition aircraft" in the town of Manbij, a bastion of the jihadists in Syria's Aleppo province.

Kurdish fighters have been a key force battling the jihadists in north and northeastern Syria and are the main component in the Syrian Democratic Forces alliance currently seeking to oust ISIS from Manbij.

They are backed by air strikes launched by the US-led coalition fighting ISIS in Syria and Iraq.

Civilians have been caught up in the fighting and on Wednesday 800 residents fled Manbij for areas under SDF control, the Observatory said.

Also Wednesday, a spokesman for the US-led coalition said it had opened a formal investigation to determine whether its strikes near Manbij last week had killed civilians.

The Observatory reported that 56 civilians were killed in strikes as they fled a village near Manbij on July 19, and Colonel Chris Garver said there was sufficient credible evidence of civilian victims to warrant a probe.

The coalition aims to open a new front in southern Syria in addition to its ongoing offensive in the northeast, US Defence Secretary Ashton Carter said Wednesday.

Carter said the move will boost security in neighbouring Jordan and further split ISIS theatres of operation in Syria and Iraq.

Qamishli is under the shared control of the Syrian regime and Kurdish authorities, who have declared zones of "autonomous administration" across parts of north and northeast Syria.

It has regularly been targeted in bomb attacks, many claimed by ISIS.

But a source in the Kurdish Asayesh security forces told AFP that Wednesday's was "the largest explosion the city has ever seen".

The area that was targeted houses several Kurdish administration buildings including the defence ministry and was considered a secure zone, with multiple checkpoints and security measures.

"This blast is the biggest in Qamishli in terms of both the toll and the damage since the beginning of the war," Observatory director Rami Abdel Rahman said.

Local officials said hospitals in the city had been swamped with casualties.

State television carried an appeal from the governor of Hasakeh province, where Qamishli is located, urging residents to donate blood.

More than 280,000 people have been killed in Syria since the war began with anti-government protests that were met with a regime crackdown.

In Aleppo city, at least 18 people were killed in government air strikes and artillery fire Wednesday on rebel-held neighbourhoods in the east, the Observatory said.

The Syrian army, meanwhile, officially announced it had severed "all the supply routes and crossings used by terrorists to bring mercenaries, weapons and ammunition into eastern neighbourhoods of Aleppo".

The opposition-held east has been effectively under siege since July 7, when government forces advanced within range of the sole remaining access route.

Aleppo was once the country's economic powerhouse but it has been ravaged by war and divided roughly between government control in the west and rebel control in the east since mid-2012.