Notre Dame Fire: French President Emmanuel Macron expressed relief that "the worst had been avoided" in a blaze that had at one point threatened the entire edifice, and left France in shock over the damage to a building described as the soul of the nation. 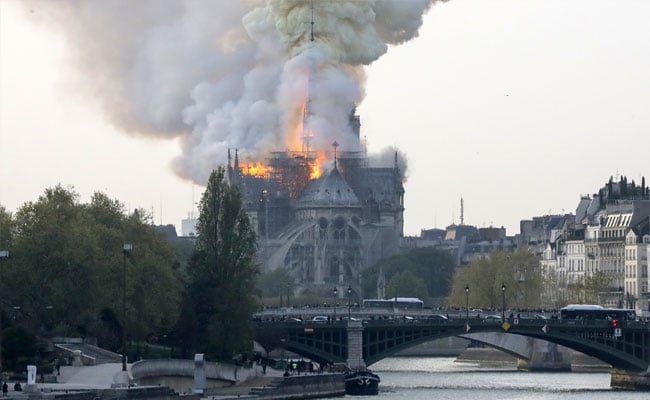 The fire at the landmark Notre-Dame Cathedral in central Paris is under control, firefighters said (AFP)

French President Emmanuel Macron has vowed to rebuild Notre-Dame Cathedral in Paris, after a colossal fire tore through the building, sending the spire crashing to the ground and wiping out centuries of heritage.

Macron expressed relief that "the worst had been avoided" in a blaze that had at one point threatened the entire edifice, and left France in shock over the damage to a building described as the soul of the nation.

The inferno destroyed the roof of the 850-year-old UNESCO world heritage landmark, whose spectacular Gothic spire collapsed as orange flames and clouds of grey smoke billowed into the sky.

Around 400 firefighters battled into the night to control the flames, declaring in the early hours of Tuesday that the fire was under control, around nine hours after it broke out.

Paris fire brigade chief Jean-Claude Gallet said "we can consider that the main structure of Notre-Dame has been saved and preserved" as well as the two towers.

"Notre-Dame survived all the wars, all the bombardments. We never thought it could burn. I feel incredibly sad and empty," Stephane Seigneurie, a consultant who joined other shocked onlookers in a solemn rendition of "Ave Maria" as they watched the fire from a nearby bridge. 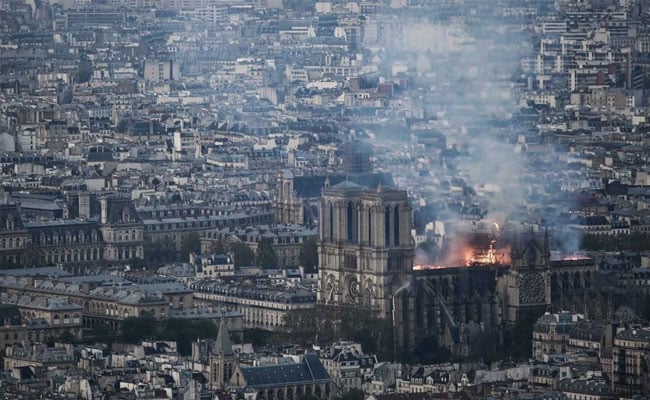 Notre Dame Cathedral Fire: The fire, which came as Catholics prepare to celebrate Easter, sent orange flames and clouds of grey smoke billowing into the sky as stunned Parisians and tourists watched on in horror (AFP)

Gasps and cries of "Oh my god" erupted around an hour after the fire first broke out when the top portion of the church's spire came crashing down.

"We have been dealt a knockout blow," a stricken-looking Paris Archbishop Michel Aupetit told reporters.

The cause of the blaze was not immediately clear, but the cathedral had been undergoing intense restoration work which the fire service said could be linked to the blaze.

French prosecutors said it was being currently being treated as accident.

Historians expressed incredulity at the collapse of a building that has been a symbol of France for almost a millennium. 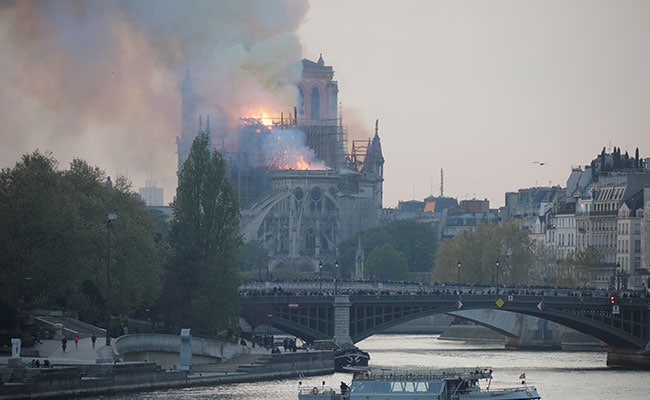 Notre Dame Fire: Historians expressed incredulity at the collapse of a building that has been a symbol of France for almost a millenium and withstood war and revolution

"If Paris is the Eiffel Tower then France is Notre Dame. It's the entire culture, entire history of France incarnated in this monument," Bernard Lecomte, a writer and specialist in religious history told BFM TV.

Deputy Paris mayor Emmanuel Gregoire told the channel that workers were scrambling "to save all the artworks that can be saved." Officials later said teams had managed to salvage an unknown quantity of the cultural treasures.

'Emotion Of A Nation'

Macron cancelled a planned policy speech and headed to the scene, where he vowed the cathedral would be reborn. 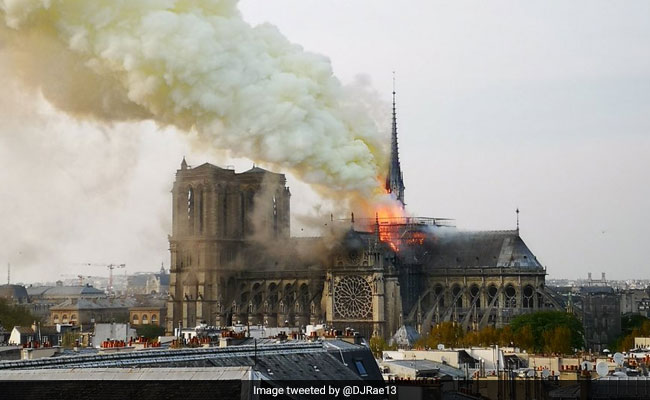 Notre Dame Fire: A spokesman for the cathedral told AFP that the wooden structure supporting the roof was being gutted by the blaze

"We will rebuild Notre-Dame because it is what the French expect," he said, describing Notre Dame as "the epicentre of our life" and the cathedral of "all the French", whether religious or not.

The Vatican on Monday expressed its "incredulity" and "sadness" over the fire.

One firefighter was seriously injured in the blaze, the fire brigade said.

US President Donald Trump in a tweet said it was "horrible" to watch the fire but caused controversy by offering advice on how to put it out.

"Perhaps flying water tankers could be used to put it out. Must act quickly!" he said.

But France's civil security service, which oversees crisis management in the country, tweeted back at Trump that the use of water-bombing aircraft was not being considered.

"If used, (this) could lead to the collapse of the entire structure of the cathedral," it said.

'Will Never Be The Same'

The cathedral was located at the centre of the French capital in the Middle Ages and its construction was completed in the mid-12th century after some 200 years of work.

During the French Revolution in the 18th century, the cathedral was vandalised in widespread anti-Catholic violence: its spire was dismantled, its treasures plundered and its large statues at the grand entrance doors destroyed.

It would go on to feature as a central character in a Victor Hugo novel published in 1831, "The Hunchback of Notre-Dame" and shortly afterwards a restoration project lasting two decades got under way, led by architect Eugene Viollet-le-Duc.

The building survived the devastation of two global conflicts in the 20th century and famously rang its bells on August 24, 1944, the day of the Liberation of Paris from German occupation at the end of the World War II.

"Paris is disfigured. The city will never be like it was before," said Philippe, a communications worker in his mid-30s.

Jacky Lafortune, a 72-year-old artist and self-described atheist stood forlornly on the banks of the River Seine staring at the cathedral.

Comparing the mood in the French capital to the aftermath of a terror attack he said: "But this stirs much deeper emotions because Notre-Dame is linked to the very foundations of our culture."

Norway Walrus Freya's Fame Could Lead To Her Death