Authorities said the fire broke out about 4 a.m. at Philadelphia Energy Solutions Refining Complex, which claims to be the largest oil refining complex on East Coast. 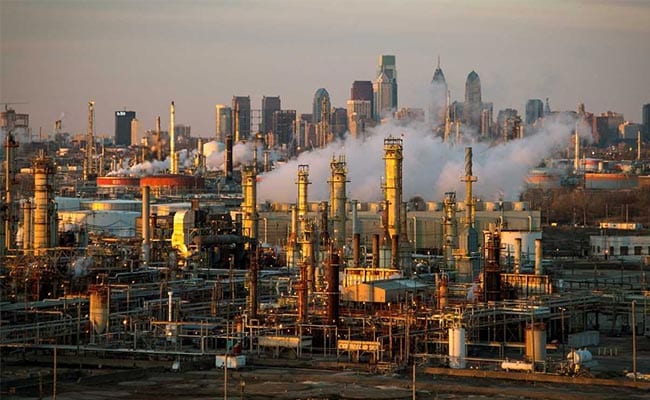 A massive fire erupted at a crude oil refinery in Philadelphia on Friday morning, triggering several explosions and sending flames high into the sky.

Authorities said the fire broke out about 4 a.m. at Philadelphia Energy Solutions Refining Complex, which claims to be the largest oil refining complex on the East Coast. Nearby residents said the eruption was so fierce that it shook picture frames from the walls and could be felt miles away in South Jersey, according to local news reports.

It was not immediately clear how the fire started, but spokeswoman for the company said the substance that is burning is believed to be mostly propane. Fire officials said earlier that it was a vat of butane that had caught fire.

Philadelphia Deputy Fire Commissioner Craig Murphy said during a morning news conference that the fire is contained inside a vat and the Philadelphia Fire Department is supporting Philadelphia Energy Solutions emergency responders to ensure that the blaze does not spread.

"This is going to be a long operation," he said. "It's confined, and it's being addressed, but it is not under control."

Philadelphia Energy Solutions spokeswoman Cherice Corley said in a statement that there were three separate explosions on an alkylation unit. Four people suffered minor injuries but all were treated at the scene, Corley said.

The Associated Press reported that this is the second fire at the refinery in the past month.

Philadelphia Energy Solutions said that the refinery complex is running "at a reduced rate."