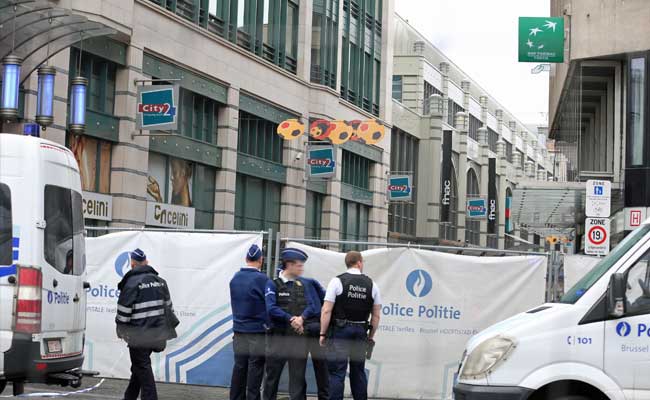 Police officers gather by a cordoned-off area at the scene of a bomb alert at the City2 shopping mall in the Rue Neuve in the city center of Brussels. (AFP Photo)

Brussels: A man with psychiatric problems who was carrying a fake suicide belt full of salt and biscuits was arrested today after he triggered a major anti-terror operation at a Brussels shopping mall, prosecutors said.

Belgium remains on a high state of alert after ISIS-claimed bomb attacks in March left 32 people dead at the airport and at a metro station near European Union headquarters buildings.

Prosecutors said they were still investigating whether the man -- who had once claimed he had been urged to join the ISIS in Syria -- had any genuine links to terrorism or not.

The 26-year-old man, identified only as J.B., called police to say he had been abducted in a car and dropped at the City 2 mall in central Brussels with an explosives belt that was to have been detonated remotely.

"After an initial inspection it was confirmed that it contained salt and biscuits. Any threat of an explosion has been initially ruled out," prosecutor's spokesman Rym Kechiche said in a statement.

"J.B. is known to the authorities for various incidents, including some linked to psychiatric problems," Kechiche said.

Police later located the car identified by the suspect in the Schaerbeek district of the capital and planned to question its owner.

The apparent threat had triggered a massive security operation.

Only one exit remained open at the nearby Rogier metro station, where soldiers checked passengers bags and belongings. Police and soldiers sealed off the immediate area.

Prime Minister Charles Michel called an emergency meeting of his security cabinet when the shopping mall alert was ongoing, reflecting the tensions in the country.

"The situation is for now under control. We remain vigilant," Michel said after the meeting.

The City 2 mall had been mentioned in Belgian media in recent days as a possible target for attacks.

The incident comes only days after Belgian authorities charged three men with "attempted terrorist murder" after raiding dozens of homes linked to a reported threat to fans watching during a Euro 2016 football game.

Authorities said at the time they were responding to a need for "an immediate intervention".

The areas searched included neighbourhoods in Brussels where November's terrorists in Paris and the Brussels suicide bombings had planned their assaults.

In proportion to its population, Belgium has the highest number of so-called foreign fighters in the EU who have travelled to wage jihad in Syria and Iraq, an estimated 500.

After Saturday's swoop, Michel said the country would be taking "additional and updated security measures."

On Saturday, a source close to Belgian authorities confirmed to news agency AFP that several leading political figures have recently had their security increased.