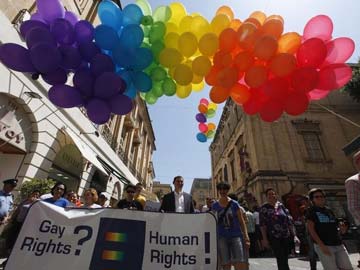 Supporters and members of the lesbian, gay, bisexual and transgender (LGBT) community take part in a gay pride parade organised by the Malta Gay Rights Movement in Valletta.

Valletta: The Maltese parliament approved a law late on Monday to recognise same-sex partnerships on a legal par with marriage, including allowing gay couples to adopt.

The law was greeted by wild celebrations by some 1,000 people in a square just outside parliament in Valletta, the capital of the predominantly Roman Catholic Mediterranean island where divorce was only legalised two years ago.

Labour Prime Minister Joseph Muscat, elected one year ago, said: "Malta is now more liberal and more European and it has given equality to all its people."

The opposition Nationalist Party abstained from the vote, saying it was in favour of civil unions but had reservations about gay adoptions.

Promoted
Listen to the latest songs, only on JioSaavn.com
Opposition leader Simon Busuttil quoted a survey which found that 80 percent of the people were against adoptions by gay couples.

"Malta has not been prepared for such a step" he said.
© Thomson Reuters 2014