The opposition Maldivian Democratic Party (MDP) said the 1.4 kilometre (0.9 mile) three-lane bridge linking the congested capital of Male to the airport island was a symbol of Yameen's "corruption". 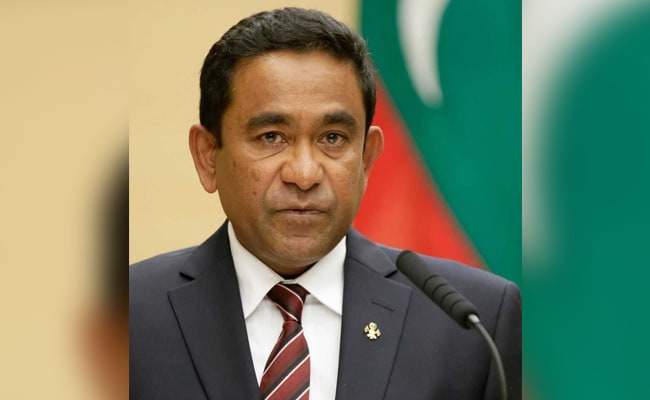 The Maldives opposition said Friday that President Abdulla Yameen had pushed the Indian Ocean nation deeper into a Chinese "debt trap" with a new $200 million bridge opened just ahead of the country's election.

Yameen commissioned the bridge with a Chinese fireworks display late Thursday night amid his campaign for the controversial September 23 vote, ahead of which he has jailed or forced into exile all of his main opponents.

The opposition Maldivian Democratic Party (MDP) said the 1.4 kilometre (0.9 mile) three-lane bridge linking the congested capital of Male to the airport island was a symbol of Yameen's "corruption".

"There was huge corruption involved in this deal," MDP spokesman Hamid Abdul Ghafoor told AFP in Colombo where he lives in self-imposed exile. "We are getting pushed into the Chinese debt trap."

The government has repeatedly denied claims of corruption.

The International Monetary Fund reported that the Maldives' external debt was estimated at 42.8 percent of GDP in 2018, up from 38.29 percent in 2017.

Yameen pledged to build the bridge during his 2013 election campaign and made infrastructure development a key plank in his reelection bid.

He said at the inauguration that the new bridge marked "the dawn of a new era" for the Sunni Muslim nation of 340,000 people.

"We see our future unfolding into an age of progress and tranquility."

The project was launched when China's President Xi Jinping visited the Maldives in 2014 and Male pledged support for China's ambitious $1 trillion Belt and Road infrastructure project across Asia and Europe.

Housing minister Mohamed Muizz said in May a Chinese grant, as well as a loan from China's EXIM bank, would make up most of the project's funding.

The upmarket tourist paradise has been on edge since Yameen imposed a 45-day state of emergency in February.

The Supreme Court annulled the results of the first round of voting when Nasheed was in the lead.

The subsequent vote was then twice delayed, allowing Yameen time to forge alliances that helped him narrowly win the contested run-off. Nasheed has been barred from running in the September vote.