Malala Yousufzai may be declared as 'Daughter of Pakistan' 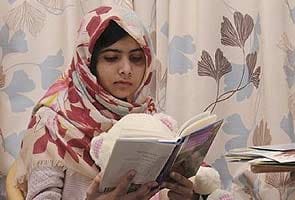 Islamabad: The Pakistan parliament today unanimously adopted a resolution asking the government to declare teenage rights activist Malala Yousufzai, the target of a recent assassination attempt by the Taliban, as the "Daughter of Pakistan".

The resolution was moved in the National Assembly or lower house of parliament by Robina Saadat Qaimkhani, a lawmaker of the ruling Pakistan People's Party.

She said Malala had become a role model for children's education across the world.

"This House gives great importance and significance to the sacrifice made by Malala Yousufzai for the sake of education. This House, therefore, recommends that Malala Yousufzai may be declared as Daughter of Pakistan," the resolution said.

Qaimkhani said Malala deserved applause and special recognition from parliament because of her struggle for promoting peace and girls' education.

The resolution was passed hours after President Asif Ali Zardari participated in a conference on the theme "Stand up for Malala, Girls Education is a Right" that was organized jointly by Pakistan and UNESCO in Paris.

Referring to the attack on Malala in the restive Swat Valley on October 9, Mr Zardari said a "young and determined daughter of Pakistan" was attacked by the "forces of darkness".

Malala stood for the right to education not only for herself but for the bright and progressive future for her country, he said.

Fourteen-year-old Malala was shot in the head in an attack by two Taliban fighters.

Promoted
Listen to the latest songs, only on JioSaavn.com
The banned Tehrik-e-Taliban Pakistan claimed responsibility for the attack saying the teenager was targeted for espousing Western values and secularism.

Mr Zardari, who visited Malala in a hospital at Birmingham in Britain before travelling to Paris, said it was deeply moving for him to meet this "young ray of hope". He said Malala was making satisfactory progress.