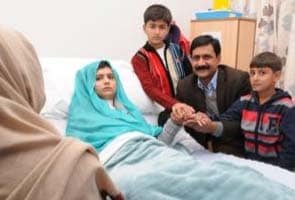 Oslo: Malala Yousafzai, the shot Pakistani schoolgirl-turned-icon of Taliban resistance, and ex-Eastern bloc activists are among those known to be nominated for this year's Nobel Peace Prize, as the deadline expired on Friday.

This year's award will be announced in early October, but speculation was already underway as the deadline for nominations ran out on February 1.

Fifteen-year-old Malala Yousafzai was shot by a Taliban gunman at point blank range as she travelled on a bus to school on October 9, targeted for promoting girls' education.

She has since become an internationally recognised symbol of opposition to the Taliban's drive to deny women education, and against religious extremism in a country where women's rights are often flouted.

"A prize to Malala would not only be timely and fitting with a line of awards to champions of human rights and democracy, but also ... would set both children and education on the peace and conflict agenda," said the head of the Peace Research Institute of Oslo, Kristian Berg Harpviken.

Belarus, which former US President George W. Bush's administration qualified as the "the last dictatorship in Europe", is governed by authoritarian President Alexander Lukashenko, who has cracked down even further on opponents of late, rights groups charge.

Trying to predict who will win the Nobel Peace Prize is a difficult task, complicated by the fact that the list of nominees each year is kept secret for 50 years.

But thousands of people are eligible to nominate candidates -- including former laureates, members of parliament and government around the world, some university professors, and members of certain international organisations -- and they are allowed to reveal the names they have put forward.

As a result, it is known that French, Canadian and Norwegian MPs have all separately nominated Malala.

Beliatsky's and Alexeyeva's names have meanwhile been put forward by two Norwegian lawmakers.

Promoted
Listen to the latest songs, only on JioSaavn.com
"They have both defied authoritarian state structures and the illegal and illegitimate abuse of power," one of the two MPs, Jan Tore Sanner, said.

The Norwegian Nobel Committee is quick to point out that a nomination should not be interpreted as any kind of recognition on its behalf. In the past, Adolf Hitler, Joseph Stalin, Benito Mussolini, and even Michael Jackson have all been nominated.