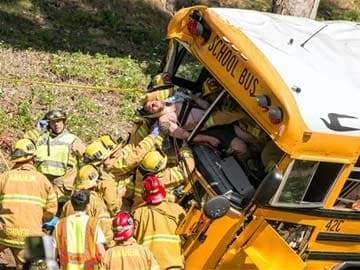 Skopje, Macedonia: Police in Macedonia say 32 people were injured when a train crashed into a long-distance bus at a railroad crossing.

Promoted
Listen to the latest songs, only on JioSaavn.com
Health officials said three people hurt in Tuesday's incident had life-threatening injuries and were transferred to the capital Skopje, while the others were taken to regional hospitals closer by.

Macedonian Railways director Oliver Derkovski said the crash occurred about 100 kilometers (60 miles) southeast of Skopje, when the bus allegedly drove around a lowered bar at the crossing.