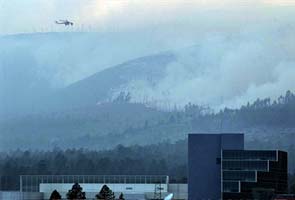 New Mexico: A wildfire near the desert birthplace of the atomic bomb advanced on the Los Alamos laboratory and thousands of outdoor drums of plutonium-contaminated waste as authorities stepped up efforts to protect the site and monitor the air for radiation.

Officials at the premier US nuclear-weapons lab gave assurances that dangerous materials were safely stored and capable of withstanding flames from the 95-square-mile fire, which at one point was as close as 50 feet from the grounds.

A small patch of land at the laboratory caught fire on Monday before fire fighters quickly put it out. Teams were on alert to pounce on any new blazes and spent the day removing brush and low-hanging tree limbs from the lab's perimeter.

"We are throwing absolutely everything at this that we got," Democratic Sen. Tom Udall of New Mexico said in Los Alamos.

The fire has forced the evacuation of the entire city of Los Alamos, population 11,000, cast giant plumes of smoke over the region and raised fears among nuclear watchdogs that it will reach as many as 30,000 55-gallon (208-litre) drums of plutonium-contaminated waste.

"The concern is that these drums will get so hot that they'll burst. That would put this toxic material into the plume. It's a concern for everybody," said Joni Arends, executive director of the Concerned Citizens for Nuclear Safety, an anti-nuclear group.

Promoted
Listen to the latest songs, only on JioSaavn.com
Arends' organisation also worried that the fire could stir up nuclear-contaminated soil on lab property where experiments were conducted years ago. Burrowing animals have brought that contamination to the surface, she said.

Lab officials said there was very little risk of the fire reaching the drums of low-level nuclear waste, since the flames would have to jump through canyons first. Officials also stood ready to coat the drums with fire-resistant foam if the blaze got too close.