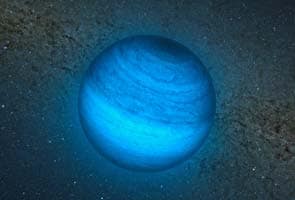 Paris: Astronomers on Wednesday reported they had detected a planet that had strayed from its star system and was wandering alone in deep space.

Object CFBDSIR2149 is believed to be a cold, young world that for unknown reasons has pulled free of the gravitational pull of its mother star, the European Southern Observatory (ESO) said.

It is not the first time that a "free-floating" planet has been found, but this one is the closest that has ever been spotted, at over 100 light years from Earth.

Initial observations sketched the object as either a homeless planet or a tiny failed star called a brown dwarf, which lacks the bulk to trigger the nuclear fusion that makes stars shine.

But the probabilities narrowed when the astronomers noted it was roaming near a stream of young, restless stars called the AB Doradus Moving Group.

"This group is unique, in that it is made up of around 30 stars that all have the same age, have the same composition and that move together through space," said astrophysicist Lison Malo at the University of Montreal.

"It's the link between the planet and AB Doradus that enabled us to deduce its age and classify it as a planet."

The astronomers used an infrared camera at the Canada-France-Hawaii Telescope and ESO's 8.2-metre (28.7-feet) Very Large Telescope in Chile, ranked the sixth biggest optical telescope in the world, to get a closer look.

CFBDSIR2149, they estimate, is between 50 and 120 million years old, with a temperature of around 400 degrees Celsius (750 degrees Fahrenheit) and a mass of four to seven times that of Jupiter, the biggest planet of our solar system.

"These objects are important, as they can either help us understand more about how planets may be ejected from planetary systems, or how very light objects can arise from the star formation process," said Philippe Delorme of France's Institute of Planetology and Astrophysics.

"If this little object is a planet that has been ejected from its native system, it conjures up the striking image of orphaned worlds, drifting in the emptiness of space."