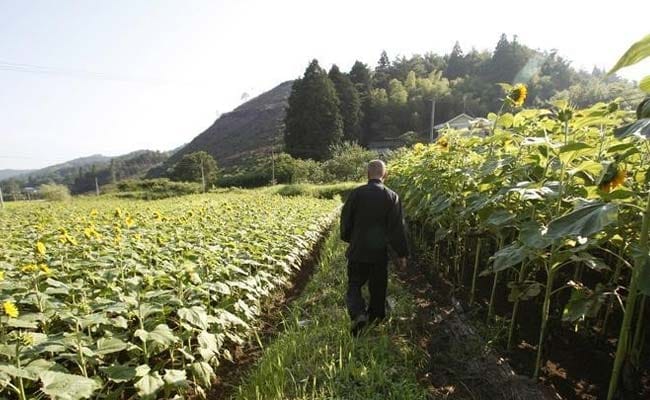 Koyu Abe, a Zen priest of Joenji temple, walks through a field of sunflowers which his volunteer group "Make A Wish Upon Flowers" had planted in Fukushima, northern Japan August 7, 2011.

According to scientific tests conducted on behalf of the environmental campaigning group, overall contamination from key isotopes such as caesium-137 and strontium-90 has fallen somewhat, but lingers, especially in places such as forests.

People in affected areas are still coming into daily contact with dangerously high levels of radiation from the April, 1986 explosion at the nuclear plant that sent a plume of radioactive fallout across large swathes of Europe.

"It is in what they eat and what they drink. It is in the wood they use for construction and burn to keep warm," the Greenpeace report, entitled "Nuclear Scars: The Lasting legacies of Chernobyl and Fukushima" says.

The research report seen by Reuters ahead of publication on Wednesday said Ukraine "no longer has sufficient funds to finance the programmes needed to properly protect the public... this means the radiation exposure of people still living in the contaminated areas is likely increasing."

Ukraine is suffering economic hardship, worsened by a pro-Russian insurgency in its eastern territories, while Russia and Belarus are also experiencing financial pressures.

The report found that in some cases, such as in grain, radiation levels in the contaminated areas - where an estimated 5 million people live - had actually increased.

"And just as this contamination will be with them for decades to come, so will the related impacts on their health. Thousands of children, even those born 30 years after Chernobyl, still have to drink radioactively contaminated milk."

DANGER IN THE FORESTS

Greenpeace said it had also conducted tests in areas contaminated by the 2011 Fukushima disaster in Japan where an earthquake and tsunami damaged a nuclear plant and caused a substantial radiation leak.

As with Chernobyl, forests around the accident site were found to have become repositories of radioactive contamination that could not be cleaned up.

"They will pose a risk to the population for decades or even centuries to come," the report said.

Greenpeace said the Japanese government's decontamination efforts had so far been inadequate and left the door open to recontamination of areas deemed to have been cleaned.

Long-term exposure to radiation can lead to severe illnesses. Doctors in the areas worst affected by Chernobyl have long reported a sharp rise in certain cancer rates.

Halina Chmulevych, a single mother of two living in a village in Ukraine's Rivne region, was cited in the report as saying she sometimes had little choice but to feed her children contaminated food.

"We have milk and bake bread ourselves that yes is with radiation," she was quoted as saying. "Everything here is with radiation. Of course it worries me, but what can I do?"
© Thomson Reuters 2016