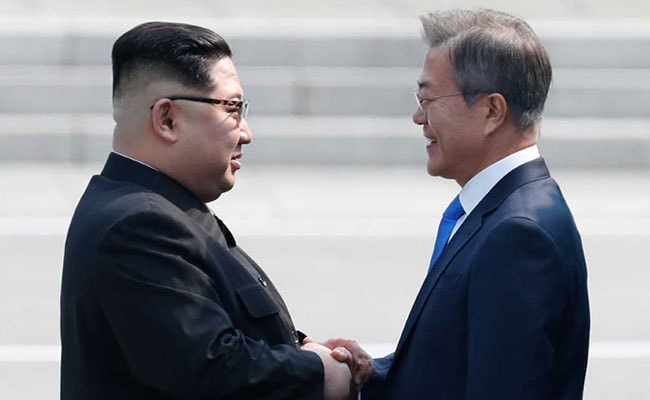 New Delhi: Smiling and holding hands, leaders of two Koreas met at historic summit at the heavily fortified demilitarised zone between the countries on Friday in the first summit for the two Koreas in over a decade. The meeting, aimed at ending their decades-long conflict and easing tensions over the North's nuclear weapons programme, comes weeks before Kim is due to meet U.S. President Donald Trump.

"I am happy to meet you," Moon told Kim before the visitor stepped over the line, making him the first North Korean leader to set foot in the South since the Korean War ended in an armistice 65 years ago.
Walking on a red carpet rolled out for the two heads of state, the pair were met by a South Korean honour guard in historical costumes and playing traditional music.

Here are the LIVE Updates of Korean Summit and Kim Jong Un's meeting with Moon Jae-in:

Apr 27, 2018 11:51 (IST)
"The two leaders had a sincere and frank dialogue over the denuclearisation and the establishment of permanent peace of the Korean peninsula and development of inter-Korea ties," the South Korean President's spokesman said.
Apr 27, 2018 11:31 (IST)
The leaders of North and South Korea will be joined by their wives Ri Sol Ju and Kim Jung-sook for a banquet on Friday after the inter-Korean summit.
Apr 27, 2018 11:09 (IST)
Sources told news agency AFP that Kim Jong Un And Moon Jae-in  discussed denuclearisation and permanent peace on peninsula.
Apr 27, 2018 10:04 (IST)
Kim Jong Un told Moon Jae-in that he was "flooded with emotion" at crossing into South Korea.
Apr 27, 2018 09:50 (IST)
Moon Jae-in expressed hopes that after their summit at Panmunjom, "our meetings will continue at Pyongyang, Seoul, Jeju island and Paektu mountain" -- the island and mountain at the southern and northern ends of the Korean peninsula, reported news agency AFP.
Apr 27, 2018 09:49 (IST)
According to the official, Moon told the visitor he could "show you scenes far better than this if you come to the Blue House", with Kim responding: "Really? I will go to the Blue House any time if you invite me." 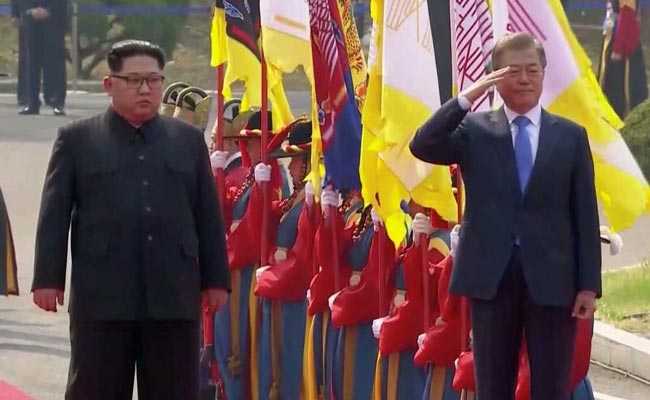 Kim's Jong Un's Security: "Not Even An Ant Can Pass Through"
When Pyongyang's leader Kim Jong Un came down the steps towards the inter-Korean border Friday he was escorted by a phalanx of bodyguards carefully chosen for their fitness, marksmanship, martial arts skills and even looks.
Apr 27, 2018 08:56 (IST)

Seven Decades Of Danger And Detente Between North and South Korea
The North's leader Kim Jong Un shook hands with the South's President Moon Jae-in on the southern side of the border truce village of Panmunjom, ahead of a summit with US President Donald Trump expected in the coming weeks.
Apr 27, 2018 08:37 (IST)
North Korea and South Korea close first round of summit talks.
Apr 27, 2018 08:05 (IST)
A crowd of people watching and taking photos of the moment Kim Jong Un and Moon Jae-in met. 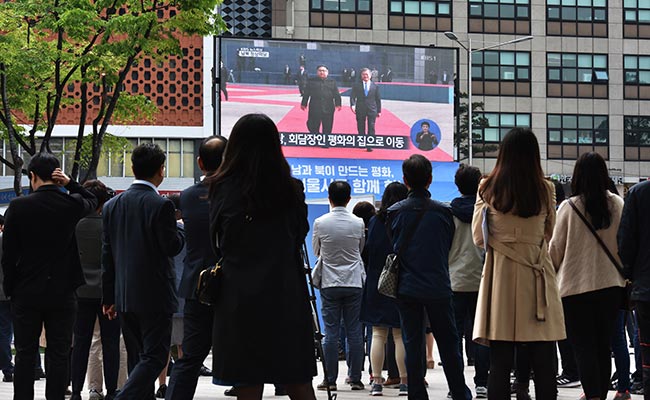 North Korea's Kim Jong Un Says A "New History Begins Now" At Inter-Korean Summit
"I came here determined to send a starting signal at the threshold of a new history," he told his host Moon Jae-in in the demilitarized zone, promising a "frank, serious and honest mindset".
Apr 27, 2018 07:27 (IST)
South Korea's Moon Jae-in says hopes for 'bold agreement' at summit
South Korean President Moon Jae-in told the North's leader Kim Jong Un that he hoped to see a "bold agreement" as they began their summit Friday.
"I hope we engage in frank talks and reach a bold agreement so that we may give a big gift to the whole Korean people and the people who want peace," Moon said. 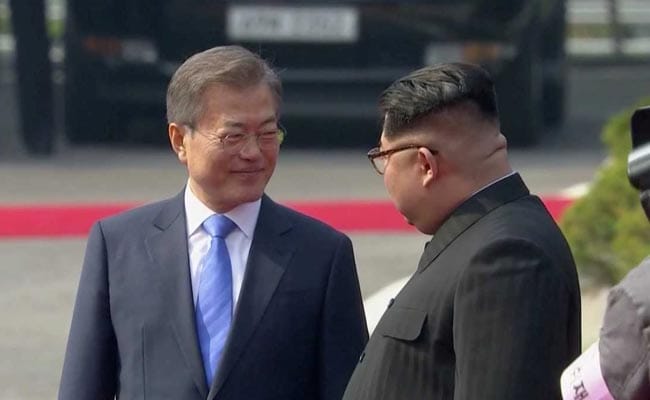 Apr 27, 2018 07:23 (IST)
US hopeful Korea talks will achieve progress toward peace
Donald Trump's White House on Thursday voiced hope that a Korean summit would "achieve progress toward a future of peace," as the leaders of the two countries sat down to talk.
Apr 27, 2018 07:11 (IST)
Inter-Korean summit begins
North Korean leader Kim Jong Un and the South's President Moon Jae-in sat down at an oval table to begin their inter-Korean summit Friday, television footage showed, according to AFP. 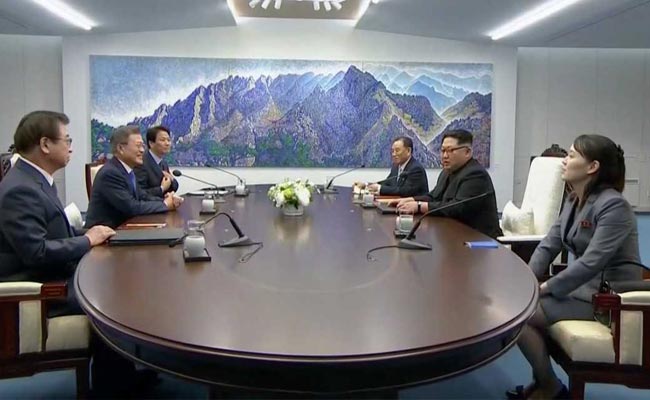 Apr 27, 2018 07:06 (IST)
Kim and Moon were photographed with two children from Daeseong-dong, the South Korean village. They smiled and posed with the leaders at the start of the welcoming ceremony. 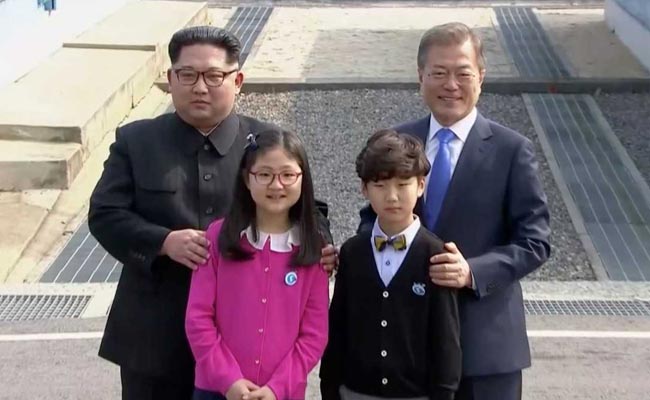 Kim Jong Un And Moon Jae In, Two Koreas' Leaders In Historic Handshake
North Korean leader Kim Jong Un and the South's President Moon Jae-in shook hands Friday over the Military Demarcation Line that divides their countries in a gesture laden with symbolism ahead of a historic summit.
Apr 27, 2018 06:58 (IST)
North Korean leader Kim Jong Un crossed the border into South Korea for the first time today, where he was greeted by the South's president, Moon Jae-in ahead of the two Koreas' first summit in more than a decade. 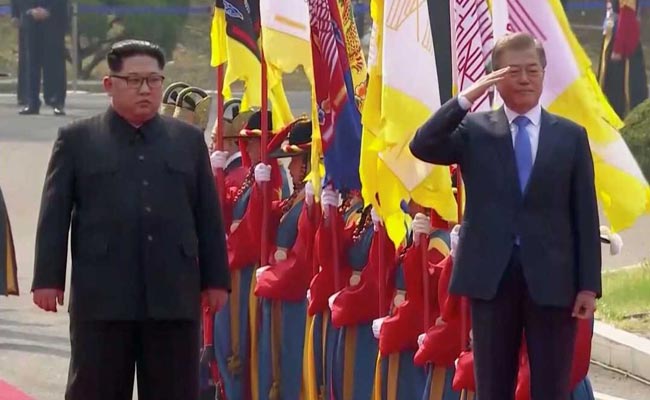