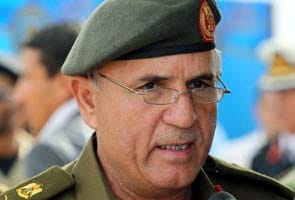 "The chief of staff presented his resignation that was accepted by the congress," GNC member Abdullah al-Gmati said, adding that the assembly had already been preparing a vote to suspend Mangoush.

His resignation was approved by a vote in the GNC, another member of the congress said.

Gmati also said that the GNC has given the government two weeks to put into place a plan to dissolve armed groups and integrate their members individually into the regular security forces.

Mangoush's resignation came a day after deadly clashes between former rebels and anti-militia demonstrators in the eastern city of Benghazi killed at least 31 people and wounded more than 100.

Clashes erupted yesterday after dozens of demonstrators, some of them armed, tried to force the powerful "Shield of Libya" brigade from its Benghazi barracks, an AFP correspondent reported.

They encircled the headquarters and called on regular security forces to step in, saying they wanted rid of armed militias in the city.

The "Shield of Libya" is mostly made up of rebels who battled dictator Muammar Gaddafi in 2011, and is formally under defence ministry control.

Mangoush had been forced to defend himself against allegations that he was defending and legitimising armed groups made up of former rebels, who still wield much influence in part of the country.

Promoted
Listen to the latest songs, only on JioSaavn.com
In May, the GNC had already decided to replace Mangoush, but said it had yet to decide on criteria for his replacement.