On August 4, the explosion of hundreds of tonnes of ammonium nitrate killed more than 200 people, wounded thousands, and ravaged large parts of the capital. 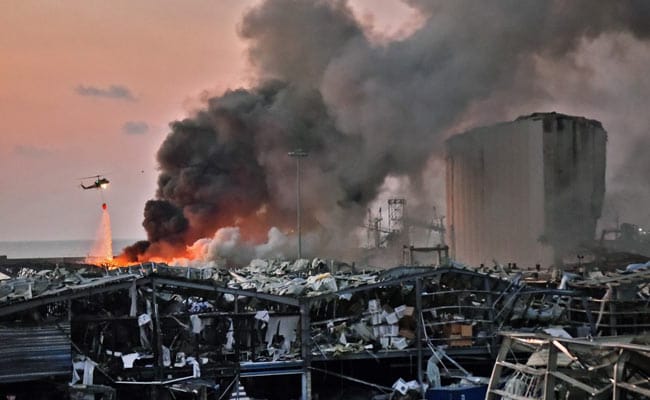 A helicopter puts out a fire at scene of an explosion at port in Beirut on August 4, 2020

The judge leading Lebanon's probe into the deadly Beirut port blast wants three members of the cabinet investigated over their possible responsibility in the disaster, a judicial source said Tuesday.

On August 4, the explosion of hundreds of tonnes of ammonium nitrate killed more than 200 people, wounded thousands, and ravaged large parts of the capital.

The government resigned in the wake of the explosion, but has remained in a caretaker capacity as talks drag on to form a new one.

He also requested it probe the role of several former ministers who held the same positions in the previous three cabinets.

The letter to the legislative chamber came after Sawan's own investigations raised "certain suspicions about the responsibility of those ministers and their failure towards addressing the presence of the ammonium nitrate at the port", the source said.

The matter is being referred to the parliament as it is the seat of a specialised higher council able to prosecute ministers.

Lebanese officials have rejected an international probe, despite demands both from home and abroad for an impartial investigation.

A local probe has so far arrested 25 people as part of the ongoing probe, including top port and customs officials.

Experts from France and the US Federal Bureau of Investigation took part in the preliminary investigation.

Judicial sources previously told AFP that Lebanon had received the report from the American experts, but was still expecting another from France.

The Beirut Bar Association has handed the public prosecutor hundreds of criminal complaints from victims of the explosion.