Read inOther Languages
This Article is From Aug 18, 2018

Kofi Annan Dead: A Ghanaian diplomat, Kofi Annan served as the seventh Secretary General of the United Nations from January 1997 to December 2006. 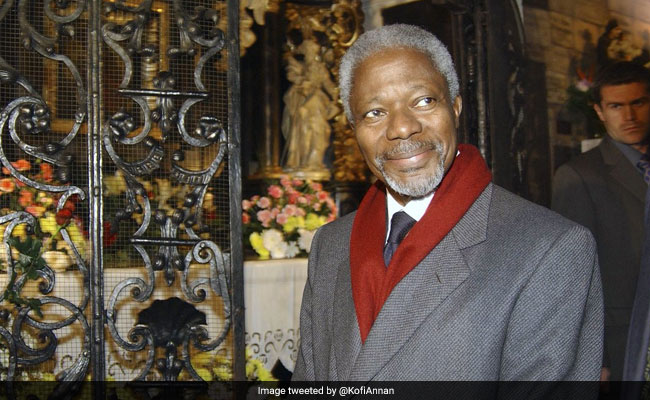 Kofi Annan, 80, died at a hospital in Bern, Switzerland

Kofi Annan, former United Nations Secretary General and Nobel Peace Laureate, has died. He was 80. A statement posted on his Twitter account said, Kofi Annan died after a short illness. "It is with immense sadness that the Annan family and the Kofi Annan Foundation announce that Kofi Annan, former Secretary General of the United Nations and Nobel Peace Laureate, passed away peacefully on Saturday 18th August after a short illness," the foundation said in a statement.

News agency Reuters says Kofi Annan died at a hospital in Bern, Switzerland, in the early hours of Saturday.

Kofi Annan was the first black African to take up the role of the world's top diplomat - United Nations Secretary General - serving two terms from 1997 to 2006. He later served as the UN special envoy for Syria, leading efforts to find a peaceful solution to the conflict.

He, along with the United Nations, received the Nobel Peace Prize in 2001 "for their work for a better organized and more peaceful world".

"In many ways, Kofi Annan was the United Nations. He rose through the ranks to lead the organisation into the new millennium with matchless dignity and determination," he added.

"Today we mourn the loss of a great man, a leader, and a visionary: former @UN Secretary General @KofiAnnan. A life well lived. A life worth celebrating," a United Nations migration body tweeted.

Kofi Annan was married and had three children.

Following is the full text of the statement announcing Kofi Annan's death by his foundation:

It is with immense sadness that the Annan family and the Kofi Annan Foundation announce that Kofi Annan, former Secretary General of the United Nations and Nobel Peace Laureate, passed away peacefully on Saturday 18th August after a short illness. His wife Nane and their children Ama, Kojo and Nina were by his side during his last days.

Kofi Annan was a global statesman and a deeply committed internationalist who fought throughout his life for a fairer and more peaceful world. During his distinguished career and leadership of the United Nations he was an ardent champion of peace, sustainable development, human rights and the rule of law.

After stepping down from the United Nations, he continued to work tirelessly in the cause of peace through his chairmanship of the Kofi Annan Foundation and as chair of The Elders, the group founded by Nelson Mandela. He was an inspiration to young and old alike.

Kofi Annan was a son of Ghana and felt a special responsibility towards Africa. He was particularly committed to African development and deeply engaged in many initiatives, including his chairmanship of the Africa Progress Panel and his early leadership of the Alliance for a Green Revolution in Africa (AGRA).

Wherever there was suffering or need, he reached out and touched many people with his deep compassion and empathy. He selflessly placed others first, radiating genuine kindness, warmth and brilliance in all he did. He will be greatly missed by so many around the world, as well as his staff at the Foundation and his many former colleagues in the United Nations system. He will remain in our hearts forever.

The family kindly requests privacy at this time of mourning. Arrangements to celebrate his remarkable life will be announced later.