Worried for her biracial children, the 40-year-old mother of three said she contacted local authorities in Lumberton Township, New Jersey, telling them about the chilling Facebook message she received from a stranger three states away, in Kentucky. 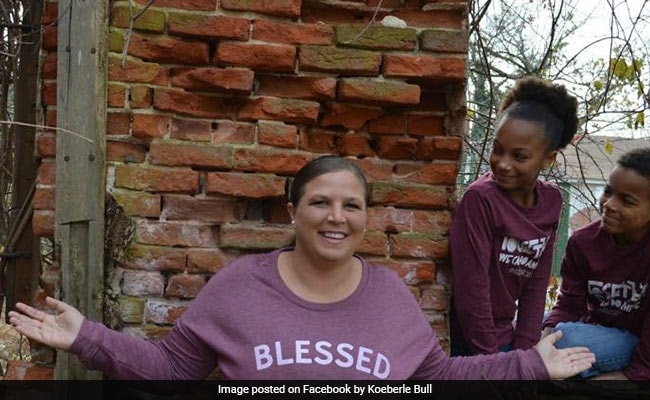 Koeberle Bull said that her Facebook profile picture shows her with her three children, ages 8, 11 and 16

Koeberle Bull had never met the man who contacted her on Facebook - calling her a "wanna be" black woman and telling her that he hoped her "black children gets hung for you being so stupid."

Worried for her biracial children, the 40-year-old mother of three said she contacted local authorities in Lumberton Township, New Jersey, telling them about the chilling Facebook message she received from a stranger three states away, in Kentucky.

Then, she said, she reached out to Kentucky State Police.

In the process, authorities said, Bull may have helped police prevent a school shooting.

Kentucky State Police officials said the man, 20-year-old Dylan Jarrell, was found last week with a firearm and more than 200 rounds of ammunition, posing a "credible and imminent" threat to two school districts in western Kentucky. He was arrested on two counts of second-degree "terroristic threatening" and one count of harassing communications, according to police.

"He was caught backing out of his driveway with the tools he needed to commit this heinous act," Kentucky State Police Commissioner Rick Sanders said at a news conference.

Sanders added that "this young man had it in his mind to go to schools and create havoc. He had the tools necessary, the intent necessary, and the only thing that stood between him and doing evil was law enforcement."

Bull, who is white, told The Washington Post that her Facebook profile picture shows her with her three children, ages 8, 11 and 16; but she does not know how or why Jarrell looked at her page or sent her a private message. She said she has no connections to Kentucky - no family members and no friends. It's unclear whether Jarrell knows anyone in her state.

She told CBS affiliate WKYT that after Jarrell sent her the Facebook message, he blocked her account, so she was not able to view his personal information. But she asked friends to tell her where the man lived so that she could contact the authorities there.

"Something in the back of my head was like, this isn't right - like, something's not sitting well," she told the station.

According to an image of the message that Bull provided to The Post, it read: "There's no such thing as white privileged . . . I hope your black children gets hung for you being so stupid. They have all the same rights we have now a days so please you and your monkey children go die."

She reported the message to police, she said, because she was concerned for her family. "I was protecting my own children and standing up for what's right," she said Tuesday.

She was "shocked" to hear what police learned.

After receiving the complaint last week, Kentucky State Police investigators discovered that Jarrell, who is white, had been previously questioned by the FBI about threats against a school in Tennessee.

When Kentucky troopers went to question him Thursday, he was leaving his home in Anderson County, Kentucky, with a firearm and ammunition, a Kevlar vest and a "detailed plan of attack," according to state police.

Police have not said why Jarrell might have targeted the districts.

Michael Clark, director of student services for Shelby County Public Schools, said Jarrell was last enrolled in Shelby County High School in 2013 but said he could not share further details due to the ongoing investigation.

Anderson County Schools Superintendent Sheila Mitchell said Jarrell had not been enrolled in the school district except for a General Educational Development (GED) test class in 2016. Jarrell completed his GED last year, Mitchell said, adding that there had been no reports about concerning behavior when he was in the program.

Since the Columbine High massacre in 1999, more than 215,000 students in the United States have been exposed to gun violence on their school campuses, according to a Washington Post database.

So far this year, there have been at least 17 school shootings.

Officials in both school districts in Kentucky said they were "grateful" to the state police - as well as the New Jersey mother who brought a potentially horrific situation to their attention.

"It was a horrible situation, but it could have ended much worse," Mitchell told The Post. "We're very grateful to her. I believe that she, with her efforts to protect her children, protected a lot of other children in Kentucky."

Bull, the mother, said the experience has been "humbling."

"I just hope more people speak out," Bull said. "We've got to give our kids a fighting shot, or our kids are going to die, and our future will die with them."

(Except for the headline, this story has not been edited by NDTV staff and is published from a syndicated feed.)
Comments
Koeberle BullFacebook