Keeping Up With The Trumps: Rough Reality For The Secret Service 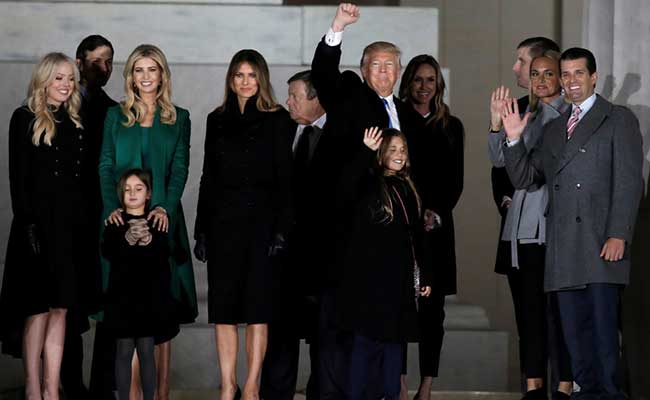 Washington, United States: Splitting their life between Washington, New York and their palatial Mar-a-Lago club in Florida, the family of Donald Trump has given the US presidency a more jet-set feel.

But for the US Secret Service agents who protect them 24 hours a day, keeping up with the Trumps is a non-stop ordeal, physically and financially.

The president, his wife Melania, five children -- and their children -- live in multiple cities, and take their own business and vacation trips. The only common thread? Their convoys of large SUVs with tinted windows.

The entire security operation is hugely complicated by Trump himself, who takes pride in being unpredictable.

With such an unorthodox president, the bodyguard ranks have had to be beefed up to ensure his protection, said counter-terrorism expert James Reese.

"To do this job as well as they do, they need planned breaks so their situational awareness and alertness is always at the cutting edge," Reese told AFP.

Former president Barack Obama, his wife, and two daughters all lived in the White House in Washington.

Trump's wife Melania has chosen to remain for now with their 11-year-old son Barron in their three-story gilded Fifth Avenue penthouse in New York.

The Secret Service stands guard over the entire 68-story building, and also drives Barron to school and back every day.

Daughter Ivanka, 35, has relocated to Washington with her husband Jared Kushner and their three children.

Both Ivanka and Kushner are senior aides to Trump. Their family lives in a mansion in the affluent Kalorama neighborhood, more than two miles (3.2 kilometers) from the White House.

They receive a 24-hour guard and a motorcade whenever the power couple heads to work.

Trump's grown sons Eric and Don Jr, who have taken control of the family's real estate empire, also get constant protection. That includes an escort of beefy guards wearing dark glasses and earpieces whenever they travel to Trump properties in distant lands.

His daughter Tiffany also has a security detail.

The costs are substantial. A simple trip Eric made to Uruguay in January cost American taxpayers $100,000.

In February, the two brothers travelled to Vancouver to inaugurate a new hotel, accompanied by their spouses and sister Tiffany. They went to Dubai to open a golf course. Before that, Eric visited a tourist project in the Dominican Republic.

And last month Don, Eric and Ivanka took their families to the Rocky Mountain resort of Aspen, Colorado for a ski break, dragging along a brigade of no less than 100 security minders.

According to the Aspen Times, the Secret Service spent $12,000 just renting their own ski equipment in order to keep up with the family on the powdery slopes.

In the most recent trip, Eric headed to Dublin this week. According to CBS television, the Secret Service spent $4,030 for limousines and $11,261 for hotel rooms.

The agency has had to beef up the number of agents assigned to the president and his family by 40 percent, according to The New York Times.

"They are flat-out worn out," Congressman Jason Chaffetz, Republican chairman of the House government oversight committee, told the Times.

The Secret Service is asking for an extra $60 million for the coming year for the extra cost of protecting the Trumps, The Washington Post reported.

That will go towards things like renting their own work space in Trump Tower, and renting golf carts to use for patrols whenever Trump heads to Mar-a-Lago -- which so far has meant most weekends.

Trump's country club in Palm Beach, built in the 1920s, is a security nightmare, sandwiched between the ocean and an inlet, serviced by one road that frequently gets jammed with traffic.

That means a larger Secret Service detachment, bolstered by the local police, and Coast Guard patrols offshore on both sides.

"The major challenge is the size of the complex," said Reese. "It was not built to the standards that are used to protect" presidents.

But Trump prefers that to the traditional presidential getaway, isolated Camp David in the Catoctin Mountains of northern Maryland, a short helicopter hop from the White House.

"The presidential retreat in Camp David is remote and much easier to defend than a publicly accessible facility in the heart of Palm Beach," said Douglas Smith, former assistant secretary at the Department of Homeland Security.

The government has not revealed how much all this is costing, but it is certainly considerable. One trip to Palm Beach in 2013 by Obama cost $3 million.

But Reese counsels against comparisons. The budget "is always changing and the Secret Service must be fluid and flexible with a president who is rewriting the rules day to day," he said.

(This story has not been edited by NDTV staff and is auto-generated from a syndicated feed.)
Comments
Trump FamilyDonald TrumpUS presidencyMar-a-Lago clubUS Secret Service