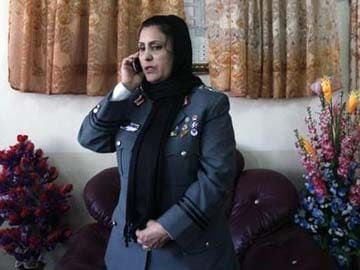 Colonel Jamila Bayaaz talks on the phone at her office in Kabul on January 15, 2014.

Kabul: An Afghan policewoman took charge of a district in the capital Kabul this week, such an unusual and dangerous appointment in a country where women have few rights that her bosses gave her four bodyguards.

Colonel Jamila Bayaaz, who joined the force more than 30 years ago, heads one of Kabul's busiest shopping districts.

Interviewed on Wednesday, Bayaaz said she hoped to inspire other women and improve paltry numbers in police ranks in the post-Taliban era, despite highly publicised recruitment drives.

One aspiring officer, she said, had already visited her office with an application.

"She was very excited and told me that when she saw me on television she was encouraged to serve as a policewoman. I was surprised," Bayaaz said in her office, bedecked with flowers from well-wishers. "My priority is to protect women and help them recruit in the police force through this job."

Joining the police force is a brave but risky move. Working alongside unrelated men in a deeply conservative society exposes women to criticism and most will suffer some form of abuse from male colleagues.

Hence the four bodyguards, twice the number usually allotted to a comparable male officer. And the armoured car.

"I know there are dangers and threats in this job, but I don't worry about them. I focus on my job, how to make things better," Bayaaz said.

Creating a female police force was considered an important victory for Western efforts to promote equality after a U.S.-led military coalition toppled the Taliban in 2001.

Forced by the Taliban to wear the head-to-toe burqa, unable to leave home on their own and barred from schools, women were supposed to secure basic freedoms. But gains have been limited.

Women in high-profile positions are often targeted by insurgents or conservative male relatives. Policewomen have suffered some of the more deadly attacks.

In southern Helmand province, the most senior female member of the force was killed last year, as was her successor.

Bayaaz had previously worked on the Criminal Justice Task Force tracking smugglers. And like most female officers, she wore no uniform - a sure way to attract unwanted attention.

Now, she works in a crisp, green jacket studded with shiny badges and tight-fitting trousers.

Witness to the convulsions that have gripped Afghan society since the 1980s, Bayaaz worked at Kabul airport during the decade-long Soviet occupation, a job she said was easier than now. Under the Taliban, she raised her five children at home.

With Afghanistan in flux as foreign troops prepare to leave, her family was supportive, though well aware of the dangers.

"People's mindset has changed a lot towards women and become more radical," she said. "My children and husband are worried about my job, but I can't quit simply because they say so."

A shortage of female staff is one of the greatest challenges facing organisers of presidential elections due in April.

Polling stations are segregated and about 12,000 women are needed to carry out female body searches to guard against bombings. But fewer than 2,000 policewomen are available.

Bayaaz's appointment comes up against the reluctance of women victims of violence to report abuse to a force in which 1 percent of officers are female. And a culture of impunity remains entrenched among male officers in terms of harassment.

"No one has been prosecuted, that's for sure. What normally happens is that a huge amount of pressure is put on women to withdraw their complaints," Elizabeth Cameron, senior adviser in Afghanistan to NGO Oxfam, said by telephone.

Promoted
Listen to the latest songs, only on JioSaavn.com
"Having a head of district is just fantastic and it sends a very strong signal to policewomen in Kabul - and to policemen."