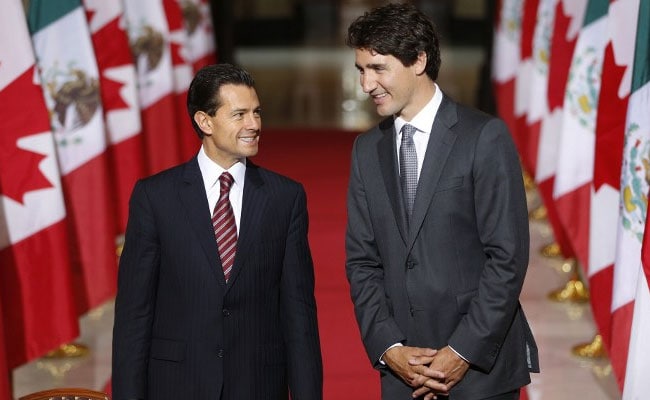 Ottawa, Canada: US President Barack Obama heads to Ottawa today for talks with the leaders of Canada and Mexico, as the shockwave from Britain's vote to leave the European Union reverberates on both sides of the Atlantic.

Obama and Canadian Prime Minister Justin Trudeau, who both made clear their desire to see Britain remain in the 28-member bloc, will join Mexican President Enrique Pena Nieto for the so-called "Three Amigos" summit.

The three countries are economic partners in the North American Free Trade Agreement (NAFTA), a bloc of 500 million people, and work closely on security matters.

Since Britain's EU referendum last week, Obama has sought to reassure Americans and global markets warning against "hysteria" and saying he doesn't expect "major cataclysmic changes" as a result of the vote.

But the US leader who will address Canadian lawmakers after the summit had warned against this very result during a trip to London in April.

Although the three leaders are expected to focus on climate change and their joint efforts to promote clean energy, the Brexit "will be on the agenda," Mark Feierstein of Obama's National Security Council said.

"We'll be eager to talk about what it means for us and how we can coordinate our efforts," he said ahead of the summit.

The "Three Amigos," who will face reporters in the early afternoon at a joint news conference, are also likely to be asked about Republican presidential hopeful Donald Trump, who is vying to succeed Obama.

In a speech on Tuesday in Pennsylvania, he reiterated that he would seek to renegotiate NAFTA, which he blames for all the woes of working Americans.

"If they don't agree to a renegotiation... then I will submit under Article 2205 of the NAFTA Agreement that America intends to withdraw from the deal," he warned.

But are the United States, Canada and Mexico worried that a Brexit will adversely affect NAFTA, or even prompt questions about whether it should exist at all?

For the Obama administration, any comparison between Europe's woes and North America is irrelevant.

"Countries in North America have pursued a different strategy, and one that has worked well for us," White House spokesman Josh Earnest said.

The White House announced ahead of the talks that the three countries would join forces to combat climate change by working together to ensure that half the continent's power comes from clean energy sources by 2025.

"We believe it is an aggressive goal, but that it is achievable continent-wide," Brian Deese, senior advisor to US President Barack Obama, said on Monday.

At the summit, Mexico will also join an existing commitment by the United States and Canada to reduce emissions of methane, a potent greenhouse gas, by 40 to 45 per cent by 2025, compared to 2012 levels.
Comments
BrexitPena NietoThree Amigos" summitJustin TrudeauTrudeau meets Pena NietoObama Canada visit