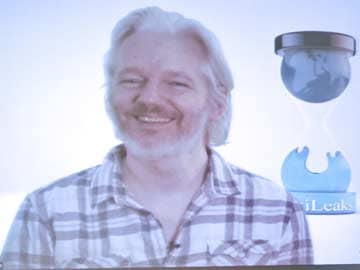 Mexico City: WikiLeaks founder Julian Assange urged US intelligence leaker Edward Snowden on Thursday to watch his "physical security" if he travels abroad after Russia gave him a residence permit.

Snowden, a former US intelligence operative who is wanted by the United States on espionage charges, was granted three-year residency by Moscow, allowing him to travel abroad, his lawyer said.

"Of course our advice is that he be extremely cautious in doing so for his physical security," Assange, a Snowden supporter, said in a videoconference held at a freedom of speech forum in Mexico City.

Promoted
Listen to the latest songs, only on JioSaavn.com
Appearing with a beard and long white hair, Assange has been holed up in Ecuador's embassy in London for more than two years as he fights a Swedish arrest warrant over sexual assault allegations.

The 43-year-old Australian fears that if he goes to Sweden he will be sent to the United States to face charges for publishing classified material.
Comments
Julian AssangeUnited StatesEdward SnowdenUS intelligenceMexico City