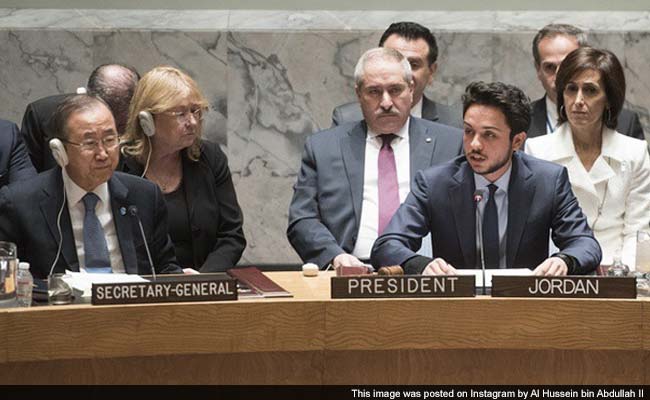 Jordan's 20-year-old crown prince today called for measures to prevent the world's youth from being "lured into the dark world" of Islamic extremists as he became the youngest person ever to chair a Security Council meeting.

Crown Prince Hussein bin Abdullah presided over the debate on the role of youth in countering violent extremism during Jordan's monthly presidency of the 15-member council.

Jordan will host an international conference in August to encourage young peacemakers to confront extremism and terrorism, he said.

Young people are the "prime victims" of terrorism and extremism, targeted for recruitment by Islamic groups who tap into frustrations felt by those who "face a dead-end," he said.

"Swift measures should be taken to stop feeding the fires of terrorism with the blood of our youth," said the crown prince.

The eldest son of King Abdullah II argued that young people must be empowered through education, job opportunities and "a decent living," and said social media can serve as a tool.

Jihadist groups in Syria and Iraq have recruited thousands of disenfranchised young people into their ranks from Europe and the Arab world.

The council heard from anthropologist Scott Atran who described the Islamic State group and Al-Qaeda as "the world's most dynamic countercultural movement," drawing youths from many places into the "most potent extraterritorial fighting force since World War II."

Peter Neumann, an expert on radicalism, reported to the council on his work with foreign fighters in Iraq and Syria, telling them that large numbers of women were now joining in the fighting.

Interviews with the foreign fighters showed that many felt excluded in their European countries and that this "opened their minds" to the jihadist recruiters' message.

Promoted
Listen to the latest songs, only on JioSaavn.com
A recent UN report showed an increase in the number of foreign fighters from last year, with more than 25,000 foreign jihadists from more than 100 countries now involved in armed conflicts.

A large number of fighters are traveling from Tunisia, Morocco, France and Russia, but the report cited new flows of jihadists from the Maldives, Finland, Trinidad and Tobago, as well as from some countries in Sub-Saharan Africa.