Prosecutors argued the 22-year-old shot and killed a parking lot attendant during an attempted robbery, a felony crime that carried a life sentence. 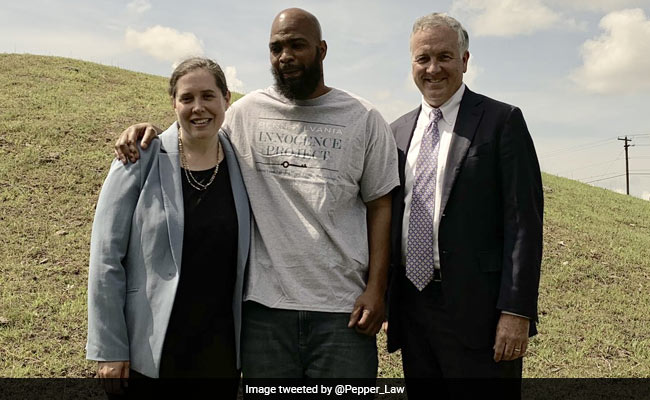 John Miller was convicted of second-degree murder in 1997.

In 1997, a Philadelphia jury convicted John Miller of second-degree murder.

Prosecutors argued the 22-year-old shot and killed a parking lot attendant during an attempted robbery, a felony crime that carried a life sentence. Miller was guilty, they said, because a key witness placed him at the scene - despite the fact that the key witness had recanted that statement, twice.

The jury convicted him anyway.

Now, 21 years later, state and federal judges in Pennsylvania, as well as the same Philadelphia District Attorney's Office that charged him with murder, have conceded Miller was innocent all along.

"Soon as I stepped out the doors I just looked up," Miller told reporters, "and was just thankful and blessed for what God has done for me."

It had taken two decades behind bars, 10 appeals and nine years of work from the pro bono attorneys at Pepper Hamilton LLP and the Pennsylvania Innocence Project to make it happen.

Miller's case, one of the project's first, had been flawed from the start.

Anthony Mullen was shot and killed in the fall of 1996 during a robbery attempt in a parking lot near 30th Street Station in Philadelphia.

For months, the case was cold, until police arrested David Williams for an unrelated robbery. In exchange for leniency, Williams said he could give authorities information on the 1996 murder. He told two different detectives that Miller, his neighbor and lifelong acquaintance, had confessed to the killing.

There was no physical evidence tying Miller to the crime scene.

Two months later, in June 1997, Miller was charged with murder and robbery.

Later, at a preliminary hearing for the trial, Williams recanted his original statement to police, claiming he had lied to police and blamed the murder on Miller because the two had been at odds.

At the weeklong trial, Williams recanted again, this time claiming he had never made the statement at all.

Miller was found guilty anyway and sentenced to life in prison.

For more than a decade, Miller filed over 10 appeals in state and federal court and on up to the U.S. Supreme Court, all of which were eventually denied on the basis that it was the jury's job to determine witness credibility, not the court.

The closest Miller came was in 2003, when he was granted a hearing in state court regarding one of his appeals. Williams, the man who blamed him for the shooting, wrote his mother a letter.

"I can't live with this on my conscience," Williams wrote, according to court documents. "Your son had no knowledge of this crime, he wasn't even there."

Williams testified at the hearing that he was the one who shot and killed Mullen in 1996. Williams claimed it was self defense, that Mullen had shot at him during an argument over money. He again recanted his original statement, claiming he had lied to police.

But the appeal was ultimately dismissed. While on the stand, Williams described Mullen as a short while male in a green jacket, when in reality the victim was tall, heavy-set black man who had been wearing red the night he was killed.

Williams plead guilty to perjury and was sentenced to prison.

Years later, in another letter to Miller's mom, Williams wrote that he panicked on the stand and purposely misidentified Mullen. Miller filed that letter alongside another appeal, according to court documents. He was denied again.

In 2011, Miller finally got someone to listen.

The Pennsylvania Innocence Project was founded in 2009. Miller applied for their help, and in the fall of 2011, Thomas Gallagher, chair of the Executive Committee of Pepper Hamilton LLP and a pro bono attorney with the project, agreed to take up Miller's fight.

The details of the trial - the two recantations - is why he took up the case.

"I could not believe that a prosecutor would present to a jury on the evidence that he did," Gallagher said. "And I couldn't believe a jury would convict."

Their challenge, though, was to find new evidence not presented at trial that could have made a difference. Basically, Gallagher said, they had to "climb Mount Kilimanjaro twice."

"It's just a really heavy burden," he said.

Over the next six months, they went to work, hiring two retired FBI agents that Gallagher worked with during his time as a district attorney. They studied old witnesses and interviewed anyone from that time who might have been able to shine a fresh light on the case.

They would find victory, eventually, in uncovering what the courts call Brady violations. Named for the landmark Supreme Court case Brady v. Maryland, they occur when the prosecution fails to turn over all evidence to the defense that might exonerate the defendant.

First was that Williams had also shared false information with police about another unsolved murder, which police uncovered at the time but did not share with police, Gallagher said.

Additionally, Williams told police in the 1990s that another man also heard Miller confess to the murder. When police followed up with that man, he said that was impossible because he had been incarcerated at the time of the shooting.

If the prosecution had told the defense about that interaction, Miller's attorneys would have had the opportunity to interview the man, too. If they had, they would have learned that while Williams and the man were in prison together, Williams said that he planned to pin the 1996 murder on Miller.

"That's the whole reason there is a constitutional obligation to turn that information over," Gallagher said. "Fairness and justice."

The Innocence Project made the Brady violations argument in state court, and were denied relief at every stage. It wasn't until 2016, after they'd exhausted all their options in state court, that Miller's attorneys were able to advance the arguments to federal court.

Three years later, on June 12, 2019, a magistrate judge ruled on the case. This time, after two decades of fighting, the decision was in their favor.

The judge vacated Miller's sentence and ordered him released from prison within 180 days.

When given the opportunity to appeal or retry the case, the Philadelphia District Attorney's Office declined both.

Wednesday morning, a trial court judge agreed with the magistrate judge's ruling. All charges against Miller were withdrawn.

"For too long, elected prosecutors were driven by a thirst for convictions and the positive media coverage that usually follows instead of achieving true justice for the jurisdictions they are meant to serve," District Attorney Larry Krasner said in a statement. "I'm heartened by the exoneration of John Miller, heartbroken for the years and potential stolen from him."

Miller's family and legal team called him in prison deliver the good news, then they piled into a charter bus to pick him up. Every month for more than 20 years, his family - mom and dad, brother and sister - had taken that same drive to visit him. This time, he'd get to leave with them.

Miller wore prison jumpsuits for so long that he wasn't sure his size in street clothes, so they packed him a bag with many options - different shirts, shoes and pants. Miller changed in the visitor bathroom and walked outside, wearing a Pennsylvania Innocence Project t-shirt.

He was not angry, Miller told a Philly Inquirer reporter who witnessed his release.

"It made me stronger," Miller said.

What comes next is unclear. Gallagher said he wants Miller to enjoy being free before they talk about bring a civil lawsuit.

Miller told reporters he wanted a steak dinner and to take his niece to the zoo. He was fascinated, the Philly Inquirer reported, by his brother's cellphone.

(Except for the headline, this story has not been edited by NDTV staff and is published from a syndicated feed.)
Comments
John MillerPhiladelphia jury