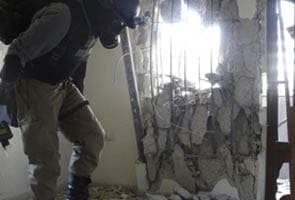 Washington: Secretary of State John Kerry said Friday there is "clear" and "compelling" evidence that the government of President Bashar Assad used poison gas against its citizens, as the Obama administration released an unclassified intelligence report on the use of chemical weapons in Syria.

"Read for yourselves the evidence from thousands of sources," Kerry said. "This is the indiscriminate, inconceivable horror of chemical weapons. This is what Assad did to his own people."

Kerry said more than 1,400 people were killed in the chemical attack, including more than 400 children.

He said the administration has "high confidence" in the intelligence, much of which was being released to the public as he spoke. But he vowed that the government has carefully reviewed the evidence to avoid the kind of intelligence failures that preceded the Iraq War.

"We will not repeat that moment," he vowed.

President Barack Obama is preparing to respond to the chemical attacks with a limited military strike on Syria despite Britain's refusal to participate in the assault and expressions of deep reservation in Congress and among the US public.

The administration has repeatedly said there is no question that Assad's government used chemical weapons against his own people in an attack on August 21 that killed hundreds of people.

That would cross the red line that Obama drew last year, when he declared that the large-scale use of chemical weapons by Assad would "change my calculus" about U.S. involvement in Syria's bloody civil war.

Aides have said that the president has not yet made up his mind about whether to strike Syria. But administration officials have said they will release an intelligence assessment about the use of chemical weapons in Syria by the end of the week.

Promoted
Listen to the latest songs, only on JioSaavn.com
Pentagon officials have moved warships and other military assets closer to Syria in preparation for a possible attack, which would most likely involve the use of cruise missiles. Defense Secretary Chuck Hagel has said the military is ready to execute any decision by Obama.