BASE Jumper Left Hanging After Parachute Gets Caught In Thailand Cliff

Locals raised the alarm on Monday after spotting Austrian Johannes Klauser suspended from his chute on Khao Ok Thalu mountain. 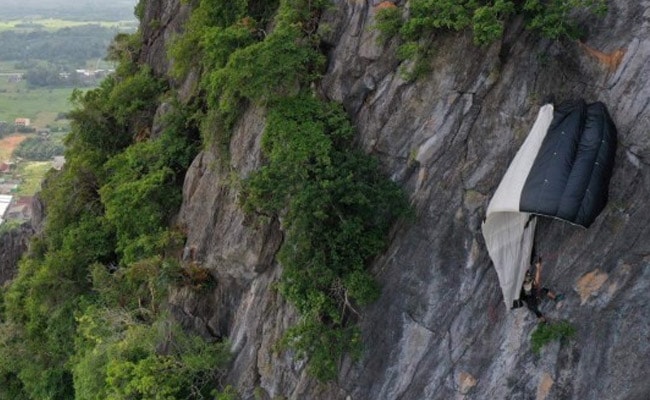 A BASE jumper was left hanging half way up a Thai cliff for several hours after his parachute got caught on jagged rocks hundreds of feet above the ground.

Locals raised the alarm on Monday after spotting Austrian Johannes Klauser suspended from his chute on Khao Ok Thalu mountain.

"He was hanging about 175 meters (575 feet) above the ground ... and must been dangling for five to six hours before being rescued," said Apisak Ratchakwan, who operated a camera drone used to help pinpoint his location.

A Thai climber managed to abseil down some 200 metres to where Klauser was trapped, freeing him to complete his journey down the cliff more sedately by rope.

Situated in the southern province of Phatthalung, Khao Ok Thalu mountain has become a BASE jumping attraction over the past year, Apisak said.

BASE jumpers use parachutes to jump off tall, static objects, and the term is an acronym for 'buildings, antennas, spans and earth'.