Joe Biden "Heartbroken" Over Deadly Attack At US Capitol

"Jill and I were heartbroken to learn of the violent attack at a security checkpoint on the US Capitol grounds," Joe Biden said in a statement. 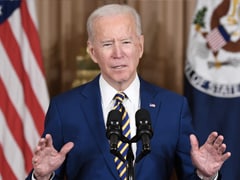 "We send our heartfelt condolences to Officer Evans' family, and everyone grieving his loss."

US President Joe Biden said he and First Lady Jill Biden were heartbroken about the attack at the US Capitol Friday that left one police officer dead and another wounded.

"Jill and I were heartbroken to learn of the violent attack at a security checkpoint on the US Capitol grounds, which killed Officer William Evans of the US Capitol Police, and left a fellow officer fighting for his life," Biden said in a statement.

"We send our heartfelt condolences to Officer Evans' family, and everyone grieving his loss."

One officer was killed and a second injured Friday after a vehicle rammed through security and crashed into a barrier at the US Capitol, forcing it into lockdown less than three months after a mob assault on Congress.

No information was available on the identity of the attacker or his motivation, but Washington Metropolitan Police Chief Robert Contee indicated that a terror link was not suspected at this stage.

"It does not appear to be terrorism-related, but obviously we will continue to investigate," said Contee.

National Guard troops were mobilized and staff at the huge Capitol complex ordered to stay away from windows and seek cover after alerts went out over the incident.

Television footage showed a blue sedan crashed into a security barrier on one of the streets leading to Congress, as what appeared to be the injured officers were loaded onto gurneys and into ambulances.

A helicopter landed on the Capitol grounds and the police were loaded on board to be taken to a hospital.

The attack came amid tightened security in Washington after the January 6 insurrection by supporters of then-president Donald Trump.