Jeffrey Epstein, 66, had previously been placed on suicide watch - though he was removed before Saturday - and was in a purportedly more secure unit of the federal Metropolitan Correctional Centre, New York

Jeffrey Epstein, the politically connected financier charged recently with sexually abusing dozens of young girls in the early 2000s, died Saturday after apparently hanging himself in a Manhattan cell, officials said, sparking outrage among victims who hoped to one day confront him in court and triggering multiple investigations into what happened.

The FBI, the Justice Department's inspector general and the New York City medical examiner all launched inquiries into how the high-profile inmate could have died in federal custody.

Epstein, 66, had previously been placed on suicide watch - though he was removed before Saturday - and was in a purportedly more secure unit of the federal Metropolitan Correctional Center, New York, when he was found unresponsive in his cell about 6:30 a.m. Saturday, officials said.

His death short circuits a trial that his accusers hoped would bring justice they felt Epstein had long evaded, and raises significant questions about U.S. prison officials' ability to protect the lives of suspects in their custody.

"Epstein is gone, but justice must still be served," said Jennifer Araoz, who accused Epstein of raping her when she was 15 years old. "I hope the authorities will pursue and prosecute his accomplices and enablers, and ensure redress for his victims."

Geoff Berman, the U.S. attorney in Manhattan, said authorities plan to keep open the investigation into those who might have conspired with Epstein to facilitate his abuse.

"Today's events are disturbing, and we are deeply aware of their potential to present yet another hurdle to giving Epstein's many victims their day in Court," Berman said in a statement. "To those brave young women who have already come forward and to the many others who have yet to do so, let me reiterate that we remain committed to standing for you, and our investigation of the conduct charged in the Indictment - which included a conspiracy count - remains ongoing."

Epstein's lawyers, Reid Weingarten, Marty Weinberg and Michael Miller, in a statement, said: "We are enormously sorry to learn of today's news. No one should die in jail. We cannot confirm rumors as to his cause of death, and we trust that the United States Attorney's Office and the United States Marshalls will thoroughly investigate the circumstances of today's tragedy."

Staff discovered Epstein hanging in his cell, said people familiar with the matter, who spoke on the condition of anonymity, though it was not immediately clear by what means. The Bureau of Prisons said in a statement Saturday that lifesaving measures "were initiated immediately by responding staff," who then requested aid from emergency medical services.

Epstein was transported to a hospital, where he was pronounced dead, the bureau said.

The Bureau of Prisons and Attorney General William Barr called the death an "apparent suicide," though one official cautioned that the investigation was in its early stages and no final determination had been made.

That official, like others interviewed for this story, spoke on the condition of anonymity to discuss the ongoing investigation.

Barr said in a statement that he was "appalled" to learn of Epstein's death in federal custody, which he said "raises serious questions that must be answered." 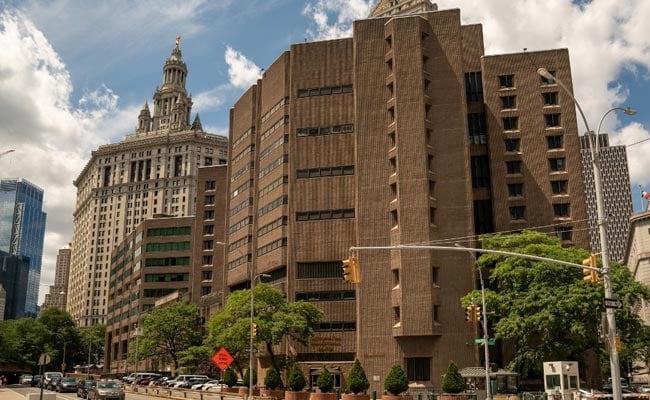 The Metropolitan Correctional Facility in New York City, where Jeffrey Epstein was found dead in his jail cell (AFP)

Epstein, a multimillionaire and registered sex offender with ties to celebrities and politicians including President Donald Trump and former president Bill Clinton, was arrested last month on federal sex trafficking charges that could have put in him prison for 45 years. Prosecutors alleged he abused dozens of young girls at his homes in Manhattan and Palm Beach, Florida, and enlisted his victims to bring him others.

Trump on Saturday seemed to cast doubt on the Justice Department's explanation of the incident, retweeting a comedian's apparent conspiracy theory - for which there is no evidence - rejecting the notion that the incident was a suicide and linking Epstein's death to the Clinton family. Trump has sought to downplay his relationship with Epstein.

A Clinton spokesman responded on Twitter: "Ridiculous, and of course not true - and Donald Trump knows it."

Epstein had pleaded not guilty to the charges, and a federal judge had denied his request to be released to home confinement. Epstein was appealing that decision.

Last month, Epstein was found in his cell with marks around his neck, and authorities were trying to determine whether he was attacked or attempted suicide. A person familiar with the matter said Epstein was placed on suicide watch - which meant he was subject to near constant monitoring and daily psychiatric evaluations - after that. But he was taken off suicide watch after about a week, this person said. He showed no obvious signs of distress at a July 31 court hearing and, in recent weeks, had been meeting with his lawyers for up to 12 hours a day to discuss his case, the person said.

People close to Epstein, noting that he seemed recently to be in good spirits, were surprised by reports of suicide, according to one person familiar their discussions Saturday, and expressed concern about the possibility of foul play. His attorneys are seeking to learn from authorities how Epstein's body was found and how such an incident could have happened, this person said.

Epstein was being held in the detention center's special housing unit, which would mean he was subject to a higher level of security, though it was not immediately clear whether he was in a cell alone. The Bureau of Prisons did not address questions about Epstein's condition of confinement.

At one point, Epstein did have a cellmate: Nicholas Tartaglione, a former police officer in custody on murder and narcotics charges, though the two were not cellmates at the time of Epstein's death. Bruce Barket, a lawyer for Tartaglione, called for "a thorough investigation into how this occurred despite the Bureau of Prisons being on notice that Mr. Epstein had already attempted suicide at least once. That investigation should be broad enough to examine the deplorable conditions inmates are forced to endure at the MCC."

Two law enforcement officials said there were no early indicators of foul play, but they noted that the FBI investigation was in its infancy.

"We don't have an indication of that right now," one law enforcement official said of the notion that someone may have killed Epstein.

On Saturday afternoon, a large black SUV with darkly tinted windows was parked in the driveway of Epstein's Palm Beach estate. A local TV news crew was in the street, but the neighborhood was quiet otherwise.

Epstein's case had attracted widespread attention - in part because of his wealth and political connections, and in part because of a lenient plea deal he reached more than a decade ago to resolve similar allegations. That 2008 agreement allowed Epstein to plead guilty to two state charges in Florida, avoiding federal exposure entirely, and spend 13 months in jail, with work-release privileges.

The deal was approved by Alexander Acosta, who was then the U.S. attorney in Miami and would go on to become Trump's labor secretary - a post he resigned from after Epstein was charged last month and the controversy over the previous case was reignited.

Representatives for those who allege that Epstein abused them and others who have followed the case said his death was not the justice they had sought.

"The fact that Jeffrey Epstein was able to commit the selfish act of taking his own life as his world of abuse, exploitation and corruption unraveled is both unfortunate and predictable," said Brad Edwards, a lawyer for some of the accusers. "While he and I engaged in contentious legal battles for more than a decade, this is not the ending anyone was looking for. The victims deserved to see Epstein held accountable, and he owed it to everyone he hurt to accept responsibility for all of the pain he caused."

Epstein's death comes less than 24 hours after a court unsealed a huge cache of records, laying out disturbing details about Epstein's alleged activities and the people in his orbit who might have observed them. The material was gathered as part of a defamation suit brought by one of Epstein's accusers against his associate Ghislaine Maxwell, a matter that was settled for an undisclosed sum in 2017. Lawyers for Maxwell did not respond to requests for comment.

Sigrid McCawley, another lawyer for some of the accusers, said the timing was "no coincidence," and she was hopeful the government could continue to investigate "those who participated and facilitated Epstein's horrifying sex trafficking scheme that damaged so many."

"The reckoning of accountability begun by the voices of brave and truthful victims should not end with Jeffrey Epstein's cowardly and shameful suicide," McCawley said.

Attorney Lisa Bloom, who represents two accusers, said on MSNBC that she plans to file a lawsuit against Epstein's estate in an effort to collect money for her clients. She called on the executors of his estate to freeze Epstein's assets and not begin to distribute them to his beneficiaries.

The death is sure to draw intense scrutiny of the Bureau of Prisons and the Metropolitan Correctional Center, New York. The high-rise federal detention center in downtown Manhattan has a fearsome reputation; one inmate who spent time there and at Guantanamo Bay famously said the U.S. facility in Cuba was "more pleasant" and "more relaxed."

The facility is no stranger to high-profile inmates. It recently housed notorious drug lord Joaquín "El Chapo" Guzmán while he was on trial in Brooklyn, and former Trump campaign chairman Paul Manafort has spent time there around court proceedings in New York - though records show he has since been moved to a different facility in Pennsylvania.

In a statement, Sen. Ben Sasse, R-Neb., who has urged the Justice Department to explore the handling of Epstein's earlier plea agreement, said "the government has failed these girls yet again."

"It is inexcusable that this rapist was not under constant suicide watch," Sasse said. "These victims deserved to face their serial abuser in court."