Elon Musk, meanwhile, extended an extraordinary stretch of wealth gains to become a centibillionaire. Tesla Inc. shares rallied Wednesday, pushing his net worth to $101 billion, according to the Bloomberg Billionaires Index, a listing of the world's 500 richest people. 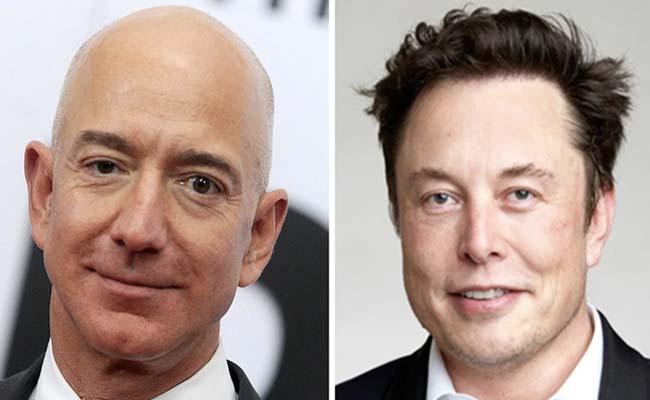 Elon Musk, 49, now one of four centibillionaires in the world.

The net worth of Amazon.com Inc. founder Jeff Bezos eclipsed $200 billion on Wednesday as shares of the e-commerce giant climbed to a record. The move simultaneously pushed his ex-wife MacKenzie Scott, 50, to the brink of becoming the world's richest woman, just behind L'Oreal SA heiress Francoise Bettencourt Meyers.

Elon Musk, meanwhile, extended an extraordinary stretch of wealth gains to become a centibillionaire. Tesla Inc. shares rallied Wednesday, pushing his net worth to $101 billion, according to the Bloomberg Billionaires Index, a listing of the world's 500 richest people.

Tech companies boosted the S&P 500 and Nasdaq Composite indexes to new highs for a fourth straight day, buoyed by news that the Federal Reserve is likely to keep short-term interest rates near zero for at least five years.

The gains by Bezos, 56, and Musk represent just the latest high water mark for wealth accumulation in a topsy-turvy year defined by both surging markets and catastrophic human and economic loss. The world's 500 richest people have gained $809 billion so far this year, a 14% increase since January, even as a global pandemic caused a record drop in gross domestic product and millions of lost jobs.

The rising income inequality has provoked sharp responses from many progressive politicians and critics on the left. U.S. Senator Bernie Sanders earlier this month introduced legislation to tax 'extreme' wealth gains during the coronavirus crisis.

"We cannot continue to allow billionaires like Jeff Bezos and Elon Musk to become obscenely rich while millions of Americans face eviction, hunger and economic desperation," Sanders said Wednesday in a statement. "It's time to fundamentally change our national priorities."

Others view their massive wealth as justified, saying they've earned it through the creation of singular businesses. "When you look at Musk and Bezos, it's understated to say that in their own ways, they've changed the world," said Thomas Hayes, chairman of Great Hill Capital.

The surge in wealth is especially concentrated in the upper ranks of the billionaires index and has been fueled largely by tech stocks, which have been on a tear as the pandemic drives more people online. That also includes a rise in the number of retail investors buying stocks.

Musk, 49, now one of four centibillionaires in the world, has seen his fortune grow by $73.6 billion this year, a jump still smaller than Bezos's, who is up by $87.1 billion. Facebook Inc.'s Mark Zuckerberg's net worth topped $100 billion earlier this month. On Wednesday alone, it rose by $8.5 billion.

U.S. tech tycoons haven't been the only beneficiaries. India's Mukesh Ambani became the first Asian to rank among the world's five richest last month. He's gained $22.5 billion this year on the back of a boost in shares of his conglomerate Reliance Industries Ltd., whose tech division has attracted recent investments from the likes of Facebook and Silver Lake.

And despite growing tensions with the U.S., China's tech billionaires have gained this year too. Tencent Holdings Ltd. Chief Executive Officer Pony Ma has amassed $16.6 billion this year and is now worth $55.2 billion. Alibaba Group Holding Ltd.'s Jack Ma and William Ding of NetEase Inc. have also added more than $12 billion each, putting their fortunes at $58.9 billion and $30.8 billion, respectively.