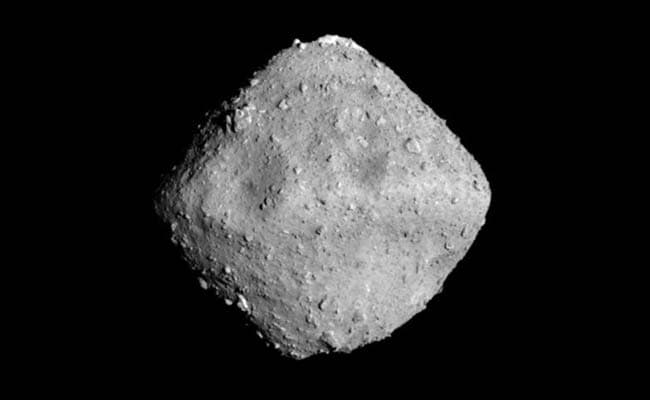 A Japanese probe has reached an asteroid 300 million kilometres away to collect information about the birth of the solar system and the origin of life after a more than three-year voyage through deep space.

Researchers broke out into cheers when the probe arrived in place, a feat JAXA described as "shooting from Japan at a six centimetre target in Brazil".

"Today, we are at the beginning of a space science exploration that is unprecedented for humankind," project manager Yuichi Tsuda told reporters.

The successful mission came just days before the UN's International Asteroid Day on June 30, a global event to raise awareness about the hazards of an asteroid impact and technological progress to counter such a threat.

Scientists hope to glean clues about what gave rise to life on Earth from samples taken from Ryugu, which is thought to contain relatively large amounts of organic matter and water.

Photos of Ryugu -- which means "Dragon Palace" in Japanese, a castle at the bottom of the ocean in an ancient Japanese tale -- show an asteroid shaped a bit like a spinning top with a rough surface.

The Hayabusa2 probe was in good shape and now ready to start exploring the asteroid over the coming 18 months, JAXA said.

The next stage is to identify suitable sites to take samples from once the probe touches down on the asteroid, scientist Seiichiro Watanabe said.

Hayabusa2, about the size of a large fridge and equipped with solar panels, is the successor to JAXA's first asteroid explorer, Hayabusa -- Japanese for falcon.

That probe returned from a smaller, potato-shaped, asteroid in 2010 with dust samples despite various setbacks during its epic seven-year odyssey and was hailed as a scientific triumph.

The Hayabusa2 mission costs 30 billion yen ($274 million) and the probe was launched in December 2014. It will stay with the asteroid for 18 months before heading back to Earth with its samples.

Its total flight time was 1,302 days and it cruised 3.2 billion kilometres through space on a circuitous route to get to its target, Tsuda told reporters.

To collect its samples, it will release an "impactor" that will explode above the asteroid, shooting a two kilo (four pound) copper object into the surface to excavate a crater a few metres in diameter.

From this crater, the probe will collect "fresh" materials unexposed to millennia of wind and radiation, hoping for answers to some fundamental questions about life and the universe, including whether elements from space helped give rise to life on Earth.

The probe will observe the surface with its camera and sensing equipment but will also drop tiny MINERVA-II rover robots as well as a French-German landing package named Mobile Asteroid Surface Scout (MASCOT) for surface observation.