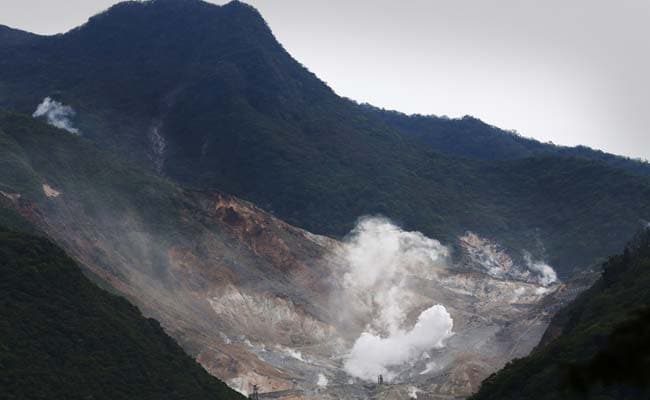 Steam rises from the rocky mountain slopes near the hot springs resort of Hakone, Kanagawa prefecture on May 6, 2015. (AFP)

Tokyo: Japan's meteorological agency today raised a volcanic warning for the popular hot springs resort of Hakone by one notch, forbidding access to a hiking trail.

The warning upgrade, which bans entry to areas around the Owakudani volcanic vent, came after seismologists detected minor but more frequent volcanic tremors at the popular tourist site, some 80 kilometres (about 50 miles) southwest of Tokyo, an official said.

"We raised the warning to level two after detecting the tremors getting relatively bigger and hitting deeper points," he said.

On Tuesday, three perceivable quakes occurred in the areas, measuring magnitude 2.0 and 2.6, he said.

The agency had advised limiting access to the resort, as the volcano had become sufficiently active to spew ash deposits and rocks on surrounding areas if an eruption occurs.

Following the warning upgrade, the town of Hakone ordered an evacuation from the Owakudani area, a popular spot where tourists and hikers are usually allowed to walk among jets of steam rising from rocky mountain slopes.

The town also closed nearby roads and cable car operations.

Increasing seismic activity, such as volcanic quakes and belching steaming gas, has been observed over the last few days in the Mount Hakone region.

But researchers have not seen any signs of magma rising, which could necessitate a major evacuation for local residents, the agency said.

The warning, which comes in the middle of the nation's "Golden Week" spring holidays, was expected to affect tourism there as some 20 million people, including foreign tourists, visit Hakone, one of the most famous hot spring resorts in Japan, every year.

Promoted
Listen to the latest songs, only on JioSaavn.com
Japan sits on the Pacific "Ring of Fire", where earthquakes and volcanic eruptions are relatively commonplace.