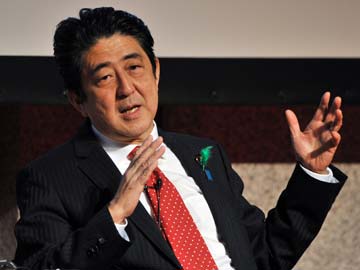 Tokyo: Japanese Prime Minister Shinzo Abe plans to launch a female-focused version of the Davos economic forum, as part of a wider push to boost the number of women in the workforce at home, he said in an interview published on Tuesday.

The conservative Abe has been pushing to boost the number of working women in Japan to help kickstart growth in the world's number three economy.

The country has one of the lowest rates of female workforce participation in the developed world and most economists agree it badly needs to boost the number of working women to grow its economy as the population rapidly ages.

But a lack of childcare facilities, poor career support and deeply entrenched sexism are blamed for keeping women at home, and for one of the lowest birthrates among the developed world as young women see having children as obstacles to their careers.

"Women have the greatest potential, and allowing them to demonstrate their full abilities is the core of our growth strategy," Abe said in the interview with Japan's leading Nikkei business daily during an official visit to Australia.

"This will be a Davos meeting for women," he said, referring to the World Economic Forum event held annually in the Swiss city.

Promoted
Listen to the latest songs, only on JioSaavn.com
The issue of entrenched sexism within Japanese society was highlighted last month after Tokyo city council members from Abe's ruling Liberal Democratic Party hurled sexist jeers at an assembly women during a debate on motherhood.

The planned Tokyo conference would look at ways to link female participation in the workforce with economic growth, the Nikkei story said.