It Takes 2 Months To Climb Mount Everest. A US Climber Did It In 2 Weeks.

During a deadly spring, Roxanne Vogel completed a "lightning ascent" that cut the length of the journey by more than half. 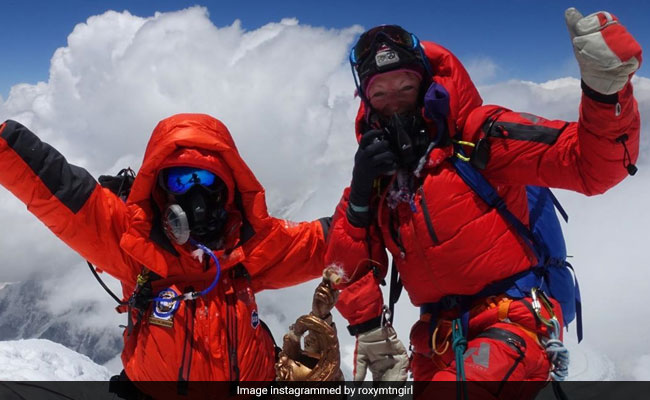 Roxanne Vogel trained for three years for a trip that defines the term whirlwind.

Nearly as difficult as summiting Mount Everest for Roxanne Vogel was coordinating in a mere number of hours her trip home, a task like something out of a "Mission Impossible" movie mixed with developing-world air travel.

Vogel trained for three years for a trip that defines the term whirlwind: she'd leave home in Berkeley, California, climb the world's tallest mountain and fly back to California all in 14 days.

On the 12th day, May 22, Vogel reached the peak, which left two days to get halfway around the world and back home while starting at one of the Earth's most remote locations.

She walked through her front door around 11 p.m., May 24 - done with one hour to spare.

"This was definitely the hardest thing I've ever done in my whole life and I thought I'd adequately tried to prepare for it mentally, but there's nothing you can do to prepare for it," Vogel, 33, said in a phone interview. "I still haven't wrapped my head around it completely yet. It's life-changing, I suppose."

Vogel scaled the mountain with guide Lydia Bradey and Sherpas Mingma Tshering and Pasang Tendi using a new "lightning ascent" protocol that cut the time needed to climb Everest - by most accounts, two months to acclimate to the oxygen levels at new heights and trek up the slopes by foot - more than in half.

Vogel spent three years training for the journey by climbing other peaks and maintaining physical fitness. In 2018, she began preparing for the elevation and oxygen levels by working and sleeping in altitude simulators, allowing her to spend less time acclimating at Everest. At home, she slept in a tent that siphoned out oxygen to mimic conditions on the mountain.

At work at GU Energy Labs, a sports nutrition science firm where she is a nutrition and performance research manager, she moved her desk into a chamber the size of a large closet that did the same thing. Co-workers would sometimes have to excuse themselves from meetings inside her office after having difficulty formulating thoughts in the oxygen-deprived space. Vogel spent close to 12 hours a day at simulated altitude for months to get ready for climbing season in early May.

She turned the experience into a science project to study the effects of a rapid ascent on the human body. Vogel would be her own guinea pig. Colleagues at GU made her specialized nutrition and energy products for the trip. She documented her training and climb on a company blog.

Traffic on Everest reached historic and tragic proportions this year as dozens of climbers lined up on the Nepal side of the mountain to summit the peak. (The Nepali government issued 381 permits to climb the mountain this year, a record.) Experienced climbers call the area the "death zone" because even with supplemental oxygen, even the most experienced climbers can only survive for a number of hours. Eleven people have died climbing Everest in 2019, nine on the Nepali side.

"Even when using bottled oxygen, supplemental oxygen, there's only a very few number of hours that we can actually survive up there before our bodies start to shut down," mountain guide Adrian Ballinger told CNN. "So that means if you get caught in a traffic jam above 26,000 feet . . . the consequences can be really severe."

"A lot of people are like, 'Why would you do this? What are you losing in wanting to do this in two weeks rather than trying to enjoy the mountain for two months?'" Vogel said. "But take the base camp. It's crowded. You're going to get sick. Pretty much everyone gets sick. And the more time you're out there, the weaker you get. There's more risk of injury or something happening while you're there. I honestly think these fast trips, maybe a month instead of two months, is a safer and better way to do it."

Vogel blocked off a monthlong window on her calendar waiting to hear if the less-trafficked Tibetan side of Everest was clear of climbers, with good weather. When she got the go-ahead the second week of May, she dropped everything and the 14-day countdown clock started.

"You just kind of have to put your life on hold," she said. "You can't go anywhere or do anything. You're just there waiting. And with the training and prep, you have to be super meticulous. Not everyone can do that."

Vogel started mountaineering in 2012 when she trekked to Everest base camp. She was recently divorced and searching for something outside her comfort zone. When she reached camp, she looked up at the rest of the mountain and thought, "I want to go higher," she said.

"I changed my whole life at that point," she said.

She flew home to North Carolina, gave up a full scholarship to graduate school and moved to Colorado to pursue climbing.

Since, she has summited dozens of mountains on nearly every continent. She is on track to complete the "explorer's grand slam," which includes the North Pole, South Pole and all seven summits, the highest peaks on each continent. Everest is considered the pinnacle of the challenge.

"When you set out to do something of this scope, something so big that a lot of people would probably never consider doing it, and then you get up there and you see dead bodies on the way to the summit, you have to consider what people sacrificed for this and how much support you have," she said. "It brings out the best in everybody and changes your perspective on the human will and the adventurous spirit."

Consider the effort it took just to get her home within the allotted window: she climbed back down from the summit to an elevated camp, slept there overnight, climbed down the mountain to base camp, then waited another two hours for a van to drive eight hours to a provincial Tibetan airport.

Three flights later, she landed in San Francisco, where her parents and a group of friends and co-workers greeted her at baggage claim, then made sure she got home before the clock struck midnight.

She's already planned her next adventure: Antarctica in December.