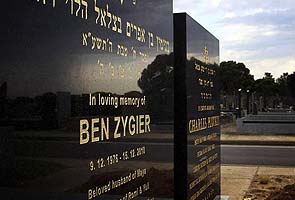 The grave of Ben Zygier (L), the Australian whom local media have identified as the man who died in an Israeli prison in 2010 and who may have been recruited by Israeli intelligence agency Mossad.

Jerusalem: Israeli lawmakers announced plans on Sunday to investigate the 2010 jailhouse death of a reported Australian immigrant recruit to the Mossad spy agency.

The statement by Parliament's Foreign Affairs and Defence Committee followed calls by Prime Minister Benjamin Netanyahu at a cabinet meeting to dim a growing media spotlight on the affair he saw as at risk of jeopardising national security.

The case kept under wraps for two years then publicised by Australian television last Tuesday involves a 34-year-old immigrant, Ben Zygier, said to be a Mossad operative held on suspicion of security offences, who died of what has been labeled an apparent suicide behind bars.

In a terse communique, the legislative panel's subcommittee on intelligence said it has "decided to conduct an intensive examination of all aspects of the incident involving the prisoner found dead in his (prison) cell in December 2010."

While unlikely to have any immediate political consequences the investigation may lead to a wider inquiry with potentially broader repercussions.

Such steps have done little to douse demands for the authorities to come clean about the circumstances of Zygier's imprisonment and how he was able to kill himself in a highly-supervised isolation cell.

Without citing the case specifically, Netanyahu said on Sunday he "absolutely trusts" Israel's security services and what he described as the independent legal monitoring system under which they operated.

"We are an exemplary democracy," Netanyahu said in remarks aired by Israeli broadcasters.

"But we are also more threatened, more challenged, and therefore we have to ensure the proper operation of our security branches," Netanyahu also said.

"Therefore I ask over everyone: Let the security services continue working quietly so that we can continue to live in safety and tranquility in the State of Israel."

The few Israeli officials who have spoken of Zygier's case have not denied that he was linked to Mossad, which in early 2010 was accused by Dubai of using Australian passport-holders to assassinate a Palestinian arms procurer in the Gulf emirate.

Media reports have speculated that Israel suspected the Melbourne-born Jew of betraying or threatening to divulge Mossad missions, perhaps to Australia's security services, as they probed passport fraud.

Civil liberties groups and some Israeli lawmakers have demanded to know whether Zygier's rights were violated by his months of incarceration under alias.

In an apparent reversal from previous statements, Australian Foreign Minister Bob Carr said on Thursday his ministry had known about Zygier's jailing as early as February 2010. On Wednesday he said Australian diplomats in Israel only found out about the detention after his death in custody later that year.

Avigdor Feldman, an Israeli lawyer with whom Zygier consulted in Ayalon prison, said last week that that meeting was arranged by a "Mossad liaison" and that his client had denied "grave charges" for which he awaited trial.

Feldman also said that Zygier's family, which has declined all comment on the affair, knew about his detention. The incarceration was approved by several Israeli courts.

"There are extreme situations...to do with our security and even the need to preserve human life, when we need to take an extreme step such as this," Yaalon told Channel Two television.

Meridor said that publishing the prisoner's identity would have risked "serious harm to security." He did not elaborate.

Tzachi Hanegbi, a lawmaker from Netanyahu's conservative Likud party said he had never been informed of Zygier's arrest as chairman of the parliamentary defence panel at the time.

Promoted
Listen to the latest songs, only on JioSaavn.com
"This requires explanation," Hanegbi said. "Usually, every significant subject, whether it is impressive achievements or embarrasing failures, is laid out before the subcommittee."

Former Mossad director Danny Yatom told Reuters the agency was under no legal obligation to brief oversight lawmakers in such circumstances.
© Thomson Reuters 2013