Israel warns Russia of action if it delivers missiles to Syria 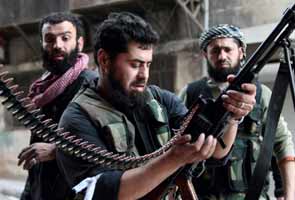 Damascus: Israel has warned it "will know what to do" if Russia delivers promised anti-aircraft missiles to its war-torn ally Syria, amid growing fears of a wider conflict brewing as the fighting spills into Lebanon.

Israel said it would act if the Russian delivery went ahead, while Syria's top rebel commander gave Hezbollah, the powerful Lebanese Shiite movement, a 24-hour ultimatum to stop fighting alongside regime forces.

The developments stoked tensions after the European Union decided to lift an embargo on supplying weapons to Syria's rebels, in a move the opposition reacted to with caution.

Syria's regime joined its ally Russia in condemning the decision as an "obstruction" to peace efforts, while accusing the bloc of supporting and encouraging "terrorists".

The United States said it supported the move as a show of "full support" for the rebels, despite its own refusal to provide arms it fears will end up in jihadist hands.

The lifting of the embargo "sends a message to the Assad regime that support for the opposition is only going to increase", said US State Department spokesman Patrick Ventrell.

Moscow said its planned to deliver to Damascus the S-300 missiles - designed to intercept aircraft or other missiles like Patriots NATO has already deployed on Turkey's border with Syria - which were part of existing contracts.

"We consider these supplies a stabilising factor," deputy foreign minister Sergei Ryabkov said, adding they could act as a deterrent against foreign intervention.

Israel has strongly objected to the delivery, and its defence minister warned of a response.

"The deliveries have not taken place, and I hope they do not. But if, by misfortune, they arrive in Syria, we will know what to do," said Moshe Yaalon.

The Jewish state has reportedly carried out at least three strikes against Syria since the uprising against President Bashar al-Assad erupted in March 2011, apparently targeting weapons.

On the ground, the conflict has already spilled over into Lebanon, and in the latest incident three soldiers were killed in an attack near the northern border town of Arsal, where most people back the uprising in Syria.

Hezbollah is allied with Syria's regime and fighting alongside the army against the rebels, including in the central town of Qusayr, where it has lost dozens of men.

Its role has raised fears Lebanon could be dragged into the war, and rebel chief Salim Idriss warned his fighters would respond within 24 hours if the group failed to halt its intervention.

"If the attacks of Hezbollah against Syrian territory do not stop within 24 hours, we will take all measures to hunt Hezbollah, even in hell," he told Al-Arabiya news channel.

The tensions overshadowed an ongoing meeting in Istanbul of Syria's opposition National Coalition, which responded cautiously to the EU's decision to lift its arms embargo on the rebels.

"Definitely it is a positive step, but we are afraid it could be too little, too late," spokesman Louay Safi told AFP.

A week into the marathon talks aimed at presenting a united front on a proposed peace conference aimed at ending the civil war, Syria's opposition remains more divided than ever, pulled apart by regional power grabs and unpopular with rebels on the ground.

The EU agreed Monday to lift the arms embargo, but no member state intends to send any weapons immediately for fear of endangering prospects for the planned peace conference.

The move divided the 27-member bloc, with Britain and France in favour and Austria, the Czech Republic, Finland and Sweden reticent to pour more arms into a conflict that has already cost some 94,000 lives.

Countries are expected to hold off on sending weapons to the rebels to allow efforts to convene the peace conference dubbed Geneva 2 that Russia and the United States are trying to organise as early as next month.

The delay in any decision to supply arms, potentially until another EU review on August 1, angered rebel fighters.

"Why wait another two months? So that the Syrian people continue to be subjected to genocide?" rebel spokesman Qassem Saadeddine told AFP.

Promoted
Listen to the latest songs, only on JioSaavn.com
Fighting continued to rage, including at the central prison in northern Aleppo, with the Syrian Observatory for Human Rights watchdog saying at least 86 people were killed across the country on Tuesday.