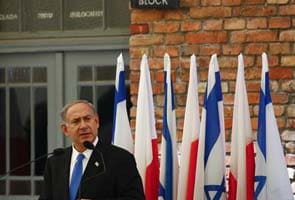 Oswiecim: Israeli Prime Minister Benjamin Netanyahu, visiting the former Nazi death camp at Auschwitz on Thursday, said the Jewish state would act -- alone if necessary -- to prevent a repetition of the Holocaust.

Netanyahu's speech at the camp in southern Poland where the Nazis killed some 1.5 million people, most of them Jews, was filled with indirect references to what Israel views as present-day threats to its existence, including from Iran and its allies.

"The Allies knew about the Holocaust, they could understand, but they did not act," Netanyahu said through an interpreter.

"For us Jews, this clearly shows that we cannot wait with folded arms for someone to do something for us. We have to act alone. Did the attitude to Jews really change? Yes, but hatred still persists," he said.

"Sixty-five years after the Holocaust, the talk is still about wiping out Israel from the world map. But today we have a strong army that allows us to stop such intentions ... What really changed is the determination to defend ourselves and not to allow the Holocaust to be repeated."

Netanyahu was at the camp, built by the Germans near to the Polish village of Oswiecim, to open a new exhibition entitled "Shoah," the Hebrew word for Holocaust.

The exhibition is curated by Yad Vashem, the Holocaust museum in Israel. The aim, the curators say, is to give visitors to Auschwitz a sense of the wider Holocaust across Europe. One exhibit is of fragments of drawings by Jewish children who were killed.

David Feuerstein, an Auschwitz survivor who was assigned camp number 160068 by his Nazi captors, said the Kaddish, a Jewish prayer ritual, at the opening ceremony.

Now 88 and living in Chile, he said he had come to preserve the memory of those who died, and to "to talk about the fact that the rebirth of the ideologies that led to the Holocaust is dangerous to the modern world."

The visit to Poland has personal significance for the Israeli prime minister because his father was born in the capital, Warsaw, before emigrating to Israel.

Promoted
Listen to the latest songs, only on JioSaavn.com
Polish Prime Minister Donald Tusk, at a joint news conference in Warsaw on Wednesday, ended his opening remarks by turning to Netanyahu and saying, in Polish, "Welcome home."