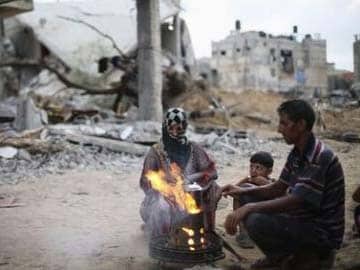 Palestinians make tea on a fire next to the ruins of their house, which witnesses said was destroyed during the Israeli offensive, on the fifth day of ceasefire in Khan Younis in the southern Gaza Strip August 18, 2014.

Gaza/ Cairo: The chief Palestinian delegate to truce talks with Israel warned on Tuesday that Gaza violence could erupt anew unless progress is made toward a lasting deal ahead of a midnight deadline in Egyptian-brokered talks.

After a last-minute agreement was stuck to extend by 24 hours a deadline to reach a truce, Azzam al-Ahmad, senior leader of President Mahmoud Abbas's mainstream Fatah movement, said there had been "no progress on any point" in talks aimed at resolving the Gaza conflict.

"We hope that every minute of the coming 24 hours will be used to reach an agreement, and if not (successful), the circle of violence will continue," Ahmad said.

He accused Israel of "manoeuvring and stalling" as gaps on key issues continued to dog efforts to achieve a long-term deal between Israel and militant groups in the Gaza Strip, dominated by Hamas Islamists, which would allow reconstruction aid to flow in after five weeks of fighting.

An Israeli government official said Israeli delegates were still in Cairo poring over details of a possible deal, although the parties had not yet agreed a draft.

"The Israeli delegation has been instructed to insist on security requirements. The moment there is an agreement, the cabinet will be called for discussions," said the official, who asked not to be identified.

Senior Hamas official Moussa Abu Marzouk accused Israel of stalling and insisted in a post on his Twitter account that his group "will never cede any" demands for a comprehensive deal.

A senior Palestinian official in Gaza said sticking points to an agreement were Hamas's demands to build a seaport and an airport, which Israel wants to discuss only at a later stage.

Israel, which launched its offensive on July 8 after a surge in Hamas rocket fire across the border, has shown scant interest in making sweeping concessions, and has called for the disarming of militant groups in the enclave of 1.8 million people.

Hamas has said that laying down its weapons is not an option.

Hamas also insists that Israel free Palestinian prisoners while Israel wants Hamas to hand over the remains of two soldiers killed during the fighting.

Israel has signalled agreement to open Gaza crossings, which would ease a blockade of the coastal territory and allow for a freer flow of goods, and to extend maritime limits in the Mediterranean Sea.

Israel made clear before the earlier truce lapsed that it would continue to hold its fire as long as Palestinians did the same.

However, Mr Netanyahu said on Sunday while visiting a naval port with his defence minister that "the Israeli military is prepared to take very aggressive action if shooting resumes" at Israel.

Israel and Hamas have not met face-to-face in Cairo, where the talks are being held in a branch of the intelligence agency, with Egyptian mediators shuttling between the parties in separate rooms. Israel regards Hamas, which advocates its destruction, as a terrorist group.

The Palestinian Health Ministry put the Gaza death toll at 2,016 and said most were civilians in the small, densely populated coastal territory. Sixty-four Israeli soldiers and three civilians in Israel have been killed.

The United Nations said 425,000 people in Gaza have been displaced by the conflict.

Promoted
Listen to the latest songs, only on JioSaavn.com
Israeli and Palestinian officials confirmed they had agreed to the latest extension of the truce to give them time to pursue further negotiations.

The latest truce is the third in 10 days when fighting was brought to a halt.
© Thomson Reuters 2014